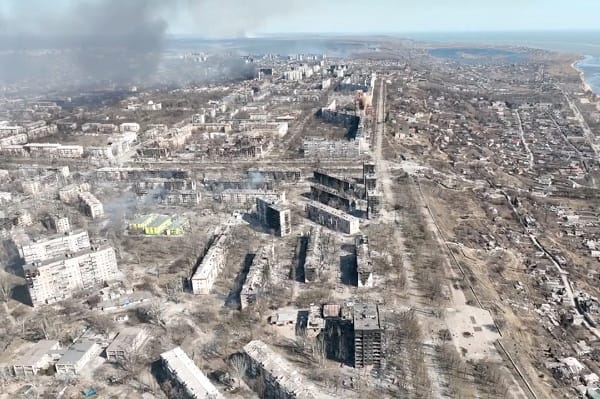 A Russian commander has ordered his troops to shoot dead civilians in the besieged city of Mariupol to “take them all f***ing out.”

The Russian commander told his soldiers that it is “not important if there were non-combatants” and ordered, “off them all, f**k” the soldier replies, “got it.”

Intercepted radio conversations released by the Ukrainian Security Service (SBU) says to “take out” Ukrainian civilians and then mobile crematoriums are being used to remove the bodies.

The recording which was released by Ukraine’s SBU reported by The Times, reveals a soldier saying, “There are two people coming out of the grove in civilian [clothes].”

The soldier said a vehicle has been seen but it is unclear if it is civilian or military, then the Russian commander orders the soldier to “take them all f***ing out!”

The recording says, “Take them all f***ing out!” his superior shouts in response, adding that it was not important if there were non-combatants or not at the scene. “Off them all, f***!”

“Got it,” the soldier says.

The incident is believed to have taken place in a village near Mariupol based on what the soldier said, The Times reported.

The leaked recording revealed another Russian soldier complaining that he and his colleagues are hugely outnumbered and have no support from Moscow.

The intercepted recording said, “Their [Ukrainian] group has 150,000 [soldiers]!” he says.

“There’s so many of them and so few of us.

The Russian’s are alos using mobile crematoriums in Mariupol to hide their crimes and atrocities of rape, mutilations and executions.

The Mayor, Vadym Boychenko warned “this is the new Auschwitz and Majdanek. The world must help punish Putin’s villains.”

Mariupol city council has announced the grim reality of what Russians forces are doing, they said that have “started to use mobile crematoriums in Mariupol to burn bodies of slaughtered Ukrainians.

“They are hiding their crimes.”

“After the wide international coverage of the genocide in Bucha, the top leadership of the Russian Federation ordered to eliminate any evidence of crimes of its army in Mariupol.”