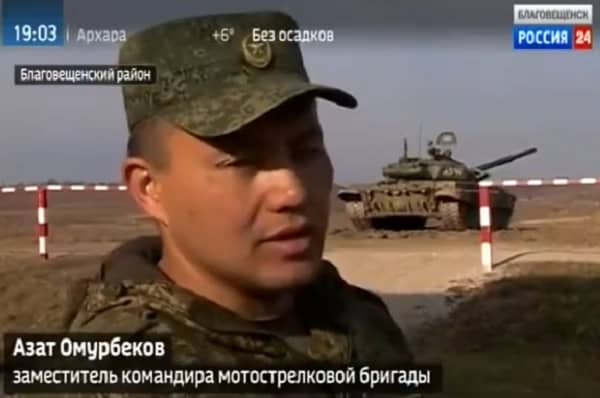 The commander of Russian troops who are strongly suspected to be behind the horrific massacre in Bucha has been named as Lt Colonel Azatbek Omurbekov who leads the 64th Separate Motorised Rifle Brigade.

Now the Ukrainian authorities are hunting down the Colonel who has been dubbed as the “Butcher of Bucha” as he allegedly oversaw the atrocities in the Kyiv region which included women and young girls being raped, shot dead and burned.

Anonymous leaks names, addresses and passport numbers of 120,000 Russian soldiers who are fighting in Ukraine

The Russian commander is said to be responsible for the “Bucha massacre” and has been called a “military villain” as his troops left “executed” civilians scattered in the streets or were thrown in to mass graves.

Oleksiy Reznikov, the Ukrainian Defence Minister, said the behaviour of Russian troops in Bucha is “utterly inhuman” and he compared them to Nazis of World War Two.

He said, “This is what the SS troops used to do in the past.

“This evil simply cannot go unpunished. Our intelligence is consistently identifying all invaders and killers.

“All of them! And each killer will at his own time get what he deserves.”

The activist group, InformNapalm, have released the address, telephone number and email address of Lt.Col Omurbekov who is behind the massacre.

The activist group, also published images of Omurbekov’s soldiers, but all the men identified have denied responsibility for the crimes in the videos.

One said, “Me and my comrades who served with me from 2014 have been accused of perpetrating war crimes in Ukraine.

“I’m just an ordinary Russian citizen. I’m not a soldier.

“I never took part in any military operations.”

Another said, “People say that I was involved in the war in Ukraine that I killed people and children, it’s all lies.

“You don’t have a single bit of proof that I was involved.”

Ukraine President Volodymyr Zelensky, who addressed the UN Security Council on Tuesday, called for Russian officers to be held accountable in war crime prosecutions “similar to the Nuremberg tribunals” which took place after World War II with many being hanged or shot dead.

He said, “The Russian military and those who gave them orders must be brought to justice immediately for war crimes in Ukraine.

“Anyone who has given criminal orders, or carried them out by killing our people, will be brought before a tribunal.”