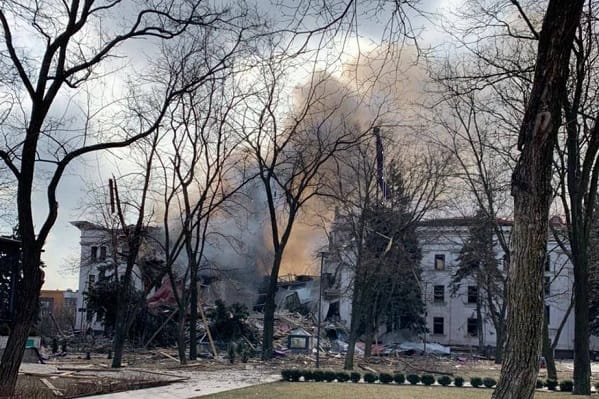 The besieged Ukrainian city of Mariupol “has been wiped off the map” and Russians are “forcibly deporting” thousands of civilians to Russian “filtration camps” where “people’s phones and documents” are being checked.

Ukrainian President Volodymyr Zelensky described the siege of Mariupol and relentless bombardment as “a terror that will be remembered for centuries to come.”

Mariupol’s city council warned that several thousand residents had been “forcibly deported” by Russian forces into Russia over the past week.

They said Russian forced have “illegally” taken “people” by “forces” from the Livoberezhniy district and from a sports club, which was being used by more than a thousand residents as a bomb shelter.

The Kremlin said thtat their buses were carrying “refugees” from Mariupol and started to arrive in Russia on Tuesday.

Mariupol’s Mayor Vadym Boychenko compared the actions of Russia to that of the Nazis capturing and deporting civilians during World War Two.

Mariupol’s Mayor said, “It is known that the captured Mariupol residents were taken to filtration camps, where the occupiers checked people’s phones and documents.

“After the inspection, some Mariupol residents were redirected to remote cities in Russia; the fate of others remains unknown.

“What the occupiers are doing today is familiar to the older generation, who saw the horrific events of World War Two, when the Nazis forcibly captured people.

“It is hard to imagine that in the 21st century people would be forcibly deported to another country.

“Not only are Russian troops destroying our peaceful Mariupol, they have gone even further and started deporting Mariupol residents.”

Ukraine's deputy PM @StefanishynaO tells @SophyRidgeSky that women are being raped and murdered, and children have been killed, and says Ukraine has more than 2,000 criminal cases open to hold Russian solders accountable.#Ridge https://t.co/31OokSLksh

President Zelenskyy described the siege of Mariupol, he warned, this “will go down in history” for the war crimes that were committed by Russian troops.

“To do this to a peaceful city, what the occupiers did, is a terror that will be remembered for centuries to come,” the Ukrainian president said in a video address to the nation.

She told Sophy Ridge On Sunday, “I absolutely believe it (is a genocide). I am a lawyer myself and I commit myself to implementation of the decision.”

She added, “Ukraine will resist as long as it is needed to make sure no terror, no genocide is committed on this land in the 21st century.”

The former British Prime Minister, Margret Thatcher’s ex aide has sent a chilling warning on Sunday that a “deranged” Vladimir Putin could set up “concentration camps” in Ukraine.

Nile Gardiner, a foreign policy expert and former aide to Thatcher warned that Putin “doesn’t care at all about human life” is “quite likely” to resort to “ethnic cleansing.”

Gardiner sent the chilling warning, that an “increasingly deranged and deluded” Putin could resort to the “occupation” of Ukraine and “quite likely ethnic cleansing, as well as mass killing.”