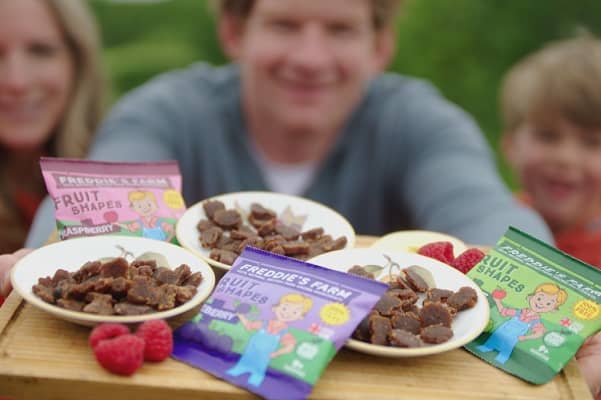 Charlie Fermor, 35, and his wife Laurie, 34, have landed the contract of a lifetime on Aldi’s Next Big Thing. Their dried fruit snacks for kids are made with only British produce, as much as possible from their own orchards and fields in Kent – and are in stores nationwide from 4th November.

Hearts melted as the nation was given an insight into Charlie and Laurie’s life at Bramley Mount Farm and their son Freddie, 6, after whom the snacks are named, and his sister, Ottie, 3.

In the show, which is hosted by Anita Rani, of Countryfile, and Chris Bavin, of Britain’s Best Home Cook, hopeful suppliers compete for a space on Aldi’s shelves, before Julie Ashfield, Managing Director of Buying at Aldi UK, decides on the winner. Last night was the turn of healthy and wholesome food and drink producers and Freddie’s Farm fought off tough competition from manufacturers of fava bean snacks, kimchi, and even camel milk, to secure a space on Aldi’s shelves.

Charlie and Laurie impressed from the off with the taste of their snacks, paper packaging, as well as health credentials.

Co-founder, Laurie Fermor explains how the healthy snacks came about: “When Freddie [now 6] was little, we didn’t like the snacks that were out there in the market so we came up with Freddie’s Farm. The drying process has been perfected over a long time so it’s quite special. We try to keep the flavours you get in raw fruit and veg. As a result, we have lower free sugars, which help prevent kids getting sugar highs and crashes, which we certainly like to avoid with our two at all costs.”

With everything grown, dried and packed within metres of the couple’s home, the carbon footprint also appealed to Aldi, which has tough sustainability targets and has been a carbon neutral business since 2019. However, to secure the contract the small business had to scale up significantly to meet the order of 325,000 packs – more than 10 times bigger than their previous biggest order.

Viewers watched with anticipation as Charlie and Laurie discussed the challenges such a huge order would create. Not only does it depend on a good harvest, but the couple need to wait 4-6 weeks for the unique paper packaging to arrive, and with their current machinery would need to be packing for 16 days straight to pack enough for Aldi’s order alone – a problem that could only be fixed by purchasing expensive new machinery.
However, Julie decided to take a risk on the Kent farmers. And it’s a risk that’s paid off as the product is available from today (4th November) in Aldi stores nationwide.

Charlie Fermor, Co-founder, Freddie’s Farm, said, “It’s just been such a long time getting to this point. I started the journey as a student studying agriculture at Reading University. I took such a risk when I invested in our unique dehydrating machine.

“Then with the pandemic happening just as business was taking off, at one point we thought we’d never get here. Actually during the show we’d convinced ourselves we hadn’t won, but when Julie announced our name it was crazy. We can’t be happier, and it was so exciting to tell the kids – we can’t wait to get them down to an Aldi store to see it on shelf now!”

Julie Ashfield, Managing Director of Buying at Aldi UK added, “It’s a fantastic product. It just ticks every single box. It’s made in Britain by British farmers, using British produce. It’s a healthy snack that I’d be happy to give to my children.”

The multi-category competition is part of Aldi’s ongoing commitment to locally sourced products. Aldi has pledged to prioritise home-grown suppliers as it works towards spending an additional £3.5 billion a year with British businesses by the end of 2025.
Freddie’s Farm dried fruit snacks are available in stores now, but shoppers need to get in quick to get a chance to try, as with all Specialbuys, once they’re gone, they’re gone!