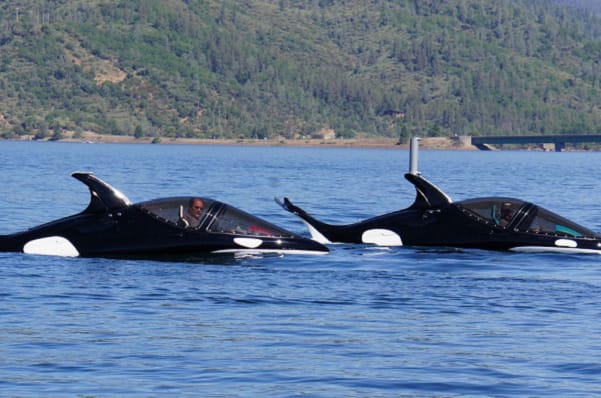 A replica killer whale submarine named the Seabreacher Z which can perform aerial stunts up to 16 feet and reach speeds of up to 62mph is to go under the hammer.

The unique submersible marine vehicle can travel 34mph under water and is t placed on auction at BVA Auctions, in Amersfoort, Netherlands at a starting price of €25,000.

The killer whale submarine comprises of two seats in the cockpit with fully customised upholstered interior offering a 360-degree view under water or flying through the air.

Innespace Productions, the innovative design and fabrication company that released their shark inspired Seabreacher X in 2010, unveiled the new underwater animal in 2011.

The Seabreacher website says, “This new killer whale vessel, which is similar in size and scale to the real thing, incorporates new Orca-inspired design features, including a more rounded off nose, large whale tail, new pectoral fins, and a taller dorsal fin.

“The new large rear tail was added to help the boat achieve a 180 degree back flip, which continues to be a goal for Innespace.

“The new Seabreacher Y comes standard with the 255hp supercharged engine found in the X model and offers the same high performance capabilities, but has the panoramic bubble canopy of the popular dolphin style J model.

“The killer whale pictured here has an upgraded 300hp engine kit, allowing it to reach speeds of up to 55mph on the surface of the water.”

The newest Seabreacher model has a Rotax 260mph supercharged engine, with a vectored thrust system, and according to Innerspace, it is “the most extreme watercraft on the market today”