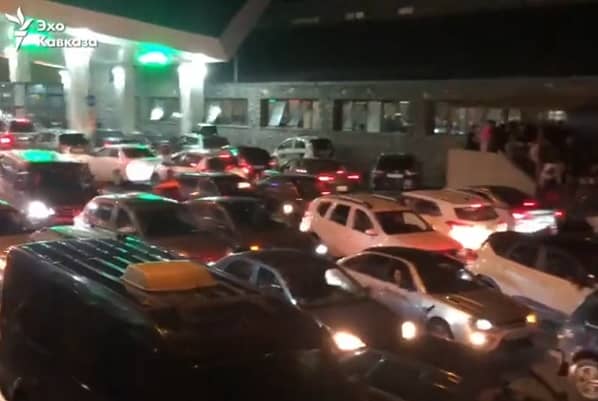 Almost 100,000 Russian men have fled to Kazakhstan to flee Putin’s draft and a ‘humanitarian matter’ is now unfolding

The President of Kazakhstan has said that 98,000 Russian men who are eligible to be conscripted to fight in Vladimir Putin’s war in Ukraine have now entered the country.

Since Putin ordered the draft of more than 300,000 conscripts last Wednesday hundreds of thousands of men have fled Russia and travelled to other EU countries.

A “humanitarian matter” is now unfolding as hotels, hostels are now full, rent has soared and there is nowhere else for the Russians to go.

Kazakh President Kassym-Jomart Tokayev said, “A lot of people from Russia have come here over the last few days.

“Most of them were forced to leave by the desperate situation.”

“We must take care of them and ensure their safety. This is a political and humanitarian matter,” he added.

The Interior Ministry have changed the immigration rules which will allow all Russians to flee without a passport and they only have to show their identity papers, but they will only be allowed to stay for three months, unless they do have a passport.

On the Russian Georgia border there is an estimated “40,000 to 50,000” trying to flee Putin’s draft and the military have arrived with officials and are giving all men “call up papers” to fight in Ukraine.

The former Vice-Speaker of Georgian Parliament and ex Deputy Foreign Minister, Sergi Kapanadze wrote on Twitter, “The situation on the Russian-Georgian border is starting to resemble a humanitarian disaster.

“Probably around 40-50 thousand persons are queued up to cross into Georgia.

“Men are abandoning cars and leaving wives and children behind just to cross the border before being mobilised.”

“They say BTR is there to prevent reservists from illegally escaping Russia… but that there are no restrictions on draft-age men.”

Russian troops have arrived at the Verkhny Lars checkpoint on the border with Georgia and have now set up a military checkpoint to stop Russian men from fleeing.

Almost 100,000 Russian men have fled to Kazakhstan to flee Putin’s draft and a ‘humanitarian matter’ is now unfolding

Russian regional officials told the TASS news agency that all men of military age queuing on the border of Georgia are being handed call-up papers to fight in Ukraine with the assistance of the Russian military.

Officials have said that they are planning to set up a military recruitment office on the border with Georgia.