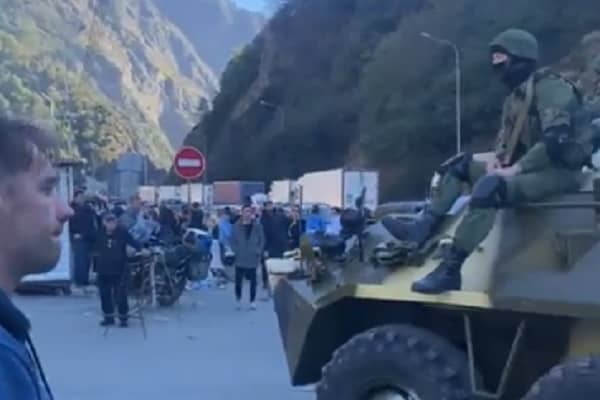 Moscow are on the verge of possibly declaring martial law and could be set to close their borders to stop “everyone” of “conscription age” from fleeing Russia’s  first mass mobilisation since World War Two.

Vladimir Putin has ordered the Russian authorities to send in soldiers to the borders and they are issuing call up papers and it will most likely end up with them arresting everyone who is of conscript age and throw them into training camps.

Russian regional officials have gone to the Georgian border where “some 10,000 Russian men” are queuing to evade conscription to enter the country.

However, the former Vice-Speaker of Georgian Parliament and ex Deputy Foreign Minister, Sergi Kapanadze wrote on Twitter, “The situation on the Russian-Georgian border is starting to resemble a humanitarian disaster.

“Probably around 40-50 thousand persons are queued up to cross into Georgia.

“Men are abandoning cars and leaving wives and children behind just to cross the border before being mobilised.”

“They say BTR is there to prevent reservists from illegally escaping Russia… but that there are no restrictions on draft-age men.”

The Border Directorate of the Federal Security Service for the Republic of North Ossetia-Alania told RBC on Telegram, “The FSB reported that an armored personnel carrier was moving to the Upper Lars border checkpoint on the border with Georgia in case people standing in line decide to break through the border.

“The armored personnel carrier is moving there, but it is not moving to set up a checkpoint, it is, roughly speaking, a reserve just in case the reservists want to break through the checkpoint and leave the country without completing any border formalities.”

NEW: At Georgia-Russia border, Danil gave me this video of Russian soldiers in balaclavas arriving. ‘There are thousands of people standing there. When the referendum in Ukraine is over (today) I think Russia is going to declare all-out war and ban men from leaving the country.’ pic.twitter.com/IoMiWc9tyn

Russian troops have arrived at the Verkhny Lars checkpoint on the border with Georgia and have now set up a military checkpoint to stop Russian men from fleeing.

Russian regional officials told the TASS news agency that all men of military age queuing on the border of Georgia are being handed call-up papers to fight in Ukraine with the assistance of the Russian military.

Officials have said that they are planning to set up a military recruitment office on the border with Georgia.

#Mobilization: Russian military is at the border with #Georgia catching draft dodgers. pic.twitter.com/7eT99SKcnk

Since the war started in February more than 50,000 have fled and since Putin announced the partial mobilisation last Wednesday “some 10,000 per day” are fleeing Russia.

Russian troops have arrived at the Verkhny Lars checkpoint on the border with Georgia, where thousands of Russians are piling up trying to leave the country. Eyewitnesses say they are setting up a roadblock pic.twitter.com/KK9cEomi3c

Ella Pamfilova, the head of Russia’s election commission, blasted those who are making efforts to leave Russia as “rats.”