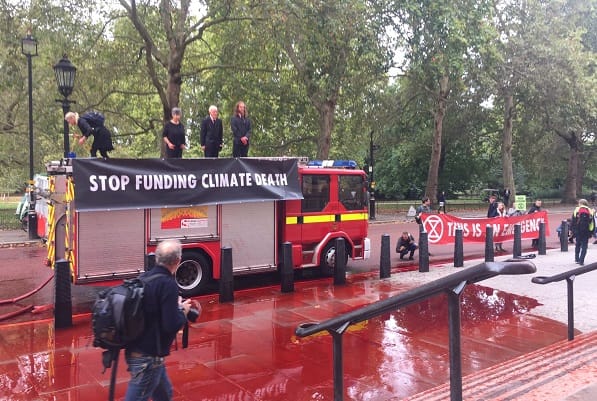 Extinction Rebellion (XR) sprayed 1,800 litres of fake blood on to the Treasury on Thursday morning from a fire engine.

Of course climate change needs to be addressed
But the constant chaos extinction rebellion causes to general life will win them no support at all
Stuff like this going wrong is just hilarious https://t.co/K71dy7Pm4Z

The climate campaigners said on their Facebook page that “the UK Treasury has blood on their hands.”

XR are calling for a “future where our cultures are resilient, regenerative, and built on respect for one another, all other forms of life, and the planet that sustains us.”

Lol’s from the Treasury pic.twitter.com/xTEghxwsGC

The Metropolitan Police said, “Police were called at 10.17 to Horse Guards Rd #SW1. People on a privately owned fire engine had sprayed a liquid at the Treasury building.

“No reported injuries. Three men and one woman were arrested on suspicion of criminal damage. Local road closures are in place while police deal.”

The Treasury said, “The UK is a world leader on climate change – having reduced its emissions by 42% between 1990 and 2017, while growing the economy by more than two thirds.

“In June, we became the first major economy to legislate to end our contribution to global warming by 2050. We will continue to build on this proud record.”