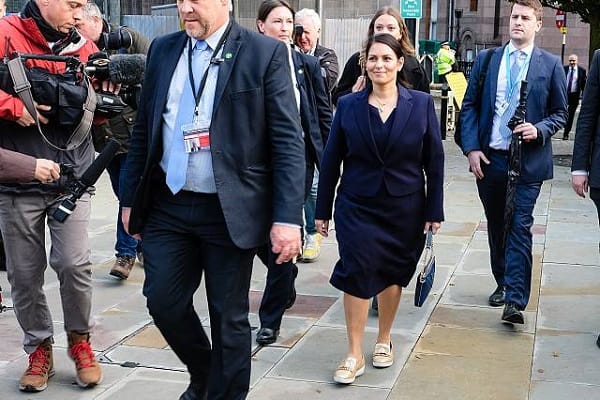 The Home Secretary Priti Patel has hit back at business critics over the immigration policy and has told private sector chiefs it is “about time” they started train up British workers.

Business leaders have warned the new immigration changes could “spell absolute disaster” for farmers, builders, construction industry which could affect HS2, the care system and the hospitality industry across the UK.

But, speaking to Sky News Patel said, “It is about time businesses started to invest in people in this country.

“We have over eight million people that is 20% of the workforce aged between 16 and 64 that are economically inactive right now.

“It is down to businesses to work well with the government and join us in investing in people, levelling up across the UK so we can have wage growth across the entire country.”

She added, “If they have an employer and they meet the skills and points threshold, then of course they can come to the United Kingdom to work.

“It is ridiculous to imply that we are just shutting down routes and that people can’t come into the UK.”

The salary threshold will now stand at £25,600 for skilled migrants coming to the UK with a job offer.

However, for migrants who earn less than £20,480 could gain concessions, provided they workers meet certain requirements and or their occupation is shot of staff.

Dame Donna Kinnair, chief executive and general secretary of the Royal College of Nursing, raised concerns that the proposals will “not meet the health and care needs of the population.”

“We have said repeatedly that for farm businesses it is about having the full range of skills needed – from pickers and packers to meat processors and vets – if we are to continue to deliver high quality, affordable food for the public. Failure to provide an entry route for these jobs will severely impact the farming sector.

“Automation will have a vital role to play and we fully support investment in this area, but it is not yet a viable option to replace the number of people we need and farmers will need a practical solution in the meantime. There are also some jobs that simply cannot be replaced by technology.

“Although the expansion of the Seasonal Workers Scheme will ease some of the pressure for the coming season, growers remain very concerned about how they will recruit vitally important seasonal workers in future.

“We are urging the government to commit to delivering a full scheme for 2021, which will enable us to recruit the 70,000 seasonal workers needed on British fruit, veg and flower farms. It is ironic that the government on the one hand is encouraging more people to increase the amount of fruit and veg in diets, yet on the other hand making it harder for that fruit and veg to be produced in Britain.

“There are several issues within this proposed policy that need addressing, not least the incredibly short timeframe given for businesses to prepare, and we will be contributing to any consultation to ensure the views of Britain’s farmers are heard.”

According to a government policy paper published this week, the “firm and fair” system is designed to “attract the high-skilled workers we need to contribute to our economy, our communities and our public services.”

But, it added, “We will not introduce a general low-skilled or temporary work route.”

The paper further said that the EU Settlement Scheme was designed to give, EU citizens permission to stay and work in the UK after Brexit and will “provide employers with flexibility to meet labour market demands.”

Employers have until 1 January 2021, which is just ten months for businesses to meet the requirements, so staff have the right to work in the UK.

Labour said the system will need many exemptions making it “meaningless” whilst the Liberal Democrats said the new immigration proposals are based on “Xenophobia.”

However, Richard Burge, Chief Executive of London Chamber of Commerce and Industry (LCCI) welcomes the change in policy.

He said, “Businesses will welcome that the Government has set the minimum salary threshold for skilled migrants closer to £25,000, than the initially suggested £30,000.

“It’s good to see the Government beginning a programme of engagement, as businesses and their employees will need to know how the system will work in practice.

“Employers are a key part of this. Whether it be T-levels, apprenticeships, or other schemes, businesses and business groups must be ready to work with Government and the public sector to ensure that relevant skills are acquired and applied.

“Ultimately, businesses share the Government’s aim that the delivery of the immigration and skills systems give public and private sector employers access to talent at all levels.”