CLICK HERE TO WATCH THE FULL VIDEO
Home Business NewsBusinessAutomotive ‘Furious drivers have turned violent’ against ‘eco terrorists’ Insulate Britain, ‘they must be locked up’ 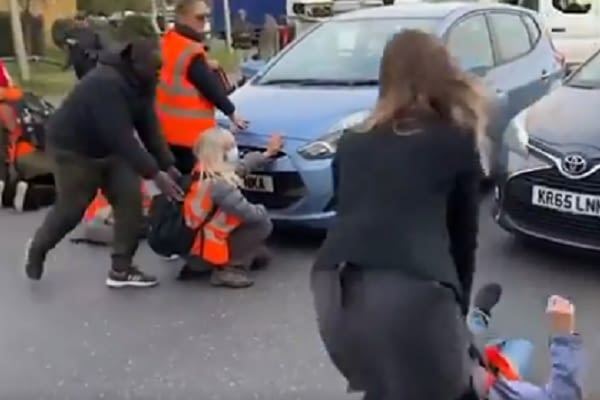 ‘Furious drivers have turned violent’ against ‘eco terrorists’ Insulate Britain, ‘they must be locked up’

Insulate Britain protesters have blocked roads again on Tuesday which is causing “absolute mayhem” and “frustration” for commuters.

People are rightfully sick of them!pic.twitter.com/hlMoHsVFau

Protesters were blocking roads in East London today and were met with an angry mob of drivers who have had enough and got out of their vehicles and started to drag the demonstrators of the road.

Furious drivers have turned violent after eco-mob Insulate Britain blocked roads at an industrial park near the Dartford Crossing. #insulatebritian

GN News presenter Dan Wootton tweeted “I repeat: Insulate Britain are eco terrorists. They must be locked up.

“People are going to die.

“And no police there – shameful.”

An angry mum who was on the school run was blocked by the “eco terrorists” and in a heated row threatened to “drive through” the protesters.

🚨 | NEW: Insulate Britain have blocked a mother from taking her 11-year-old son to schoolpic.twitter.com/DxKGP62M3S

The High Court issued injunctions against protesters from being allowed to block major roads, the M25, M4 and the Port of Dover, but Insulate Britain have said they do not care and will continue to breach the injunction.

I repeat: Insulate Britain are eco terrorists. They must be locked up.
People are going to die.
And no police there – shameful. https://t.co/kkJQWQsT7Z

So far there have been 112 court papers sent to protestors who could face up to 2-years in prison, as yet not one has been sent to jail.

this Insulate Britain thing ends with someone actually driving through them, by the way. there will be injuries and outrage and then a yougov poll will find the majority of the country were on the drivers' side. after a very public trial they'll get off with a £600 fine

Spokesman Liam Norton from Insulate Britain said, “In 10-years time when fuel crises are catastrophic, when the food has run out and when people are experiencing unsurvivable heat waves, what would you be wishing you had done now?

“We think you’ll be wishing you had sat on the road with Insulate Britain doing whatever it took to protect current and future generations. So come join us on the road.”