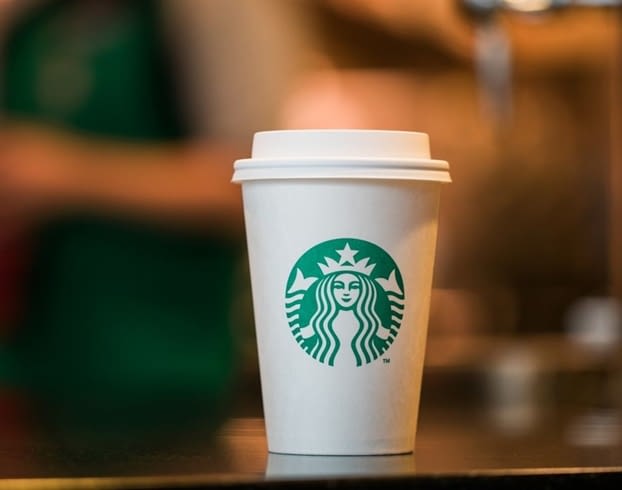 Starbucks today announces that it will test a 5p paper cup charge across all 950 stores in Britain from Thursday 26th July, following a three-month trial in London. The charge will see all stores add 5p on to the cost of any drink purchased in a paper cup in a bid to further encourage customers to bring in a reusable cup.  Customers using reusable cups already received a longstanding 25p discount off any Starbucks drink, aimed at reducing paper cup waste. The announcement comes after positive trial results showed a 126% uplift in the use of reusable cups in participating stores, measured by the number of customers redeeming the reusable 25p cup discount.

Throughout the three-month trial Starbucks worked with environmental charity and behavioural change experts Hubbub, who compiled a report evaluating the overall impact of the charge on customer behaviour.  The report shows that the percentage of customers bringing in their own cup or tumbler increased in the trial stores from 2.2% before the trial to 5.8% during the trial.Mornings see the highest volume of customers going reusable, with 8% of all hot drinks served in reusable mugs or tumblers.

The results indicate that a nationwide roll out of a 5p charge with supporting instore communications and staff training would have an impact on reducing paper cup use. Starbucks is continuing to work with the industry to share the findings of this trial charge, as well as leading in innovations to support reducing plastics waste, and finding alternatives to single-use paper cups. Earlier this year Starbucks committed $10m to develop a fully recyclable and compostable hot cup in partnership with Closed Loop Partners, through the NextGen Cup Challenge.

Starbucks policy is to serve all drink in-store customers with ceramic cups, and all company-owned stores in Britain offer paper cup recycling. Earlier this week, the company has announced plans to eliminate single-use plastic straws globally by 2020, making a new Starbucks strawless lid a standard on all iced coffee, tea and espresso beverages. This new lid has already launched in 150 stores across Europe, Middle East and Africa and will reach all stores through a phased rollout. Starbucks is also introducing straws made from alternative-materials, including paper or PLA compostable plastic, for Frappuccino blended beverages or customers who prefer or need a straw.

Martin Brok, president, Starbucks Europe, Middle East and Africa said:“We saw encouraging results from the first three months of this trial with Hubbub, and what stood out to us was the positive response we had from our partners (employees) and customers who continue to push us to innovate and find ways to reduce waste. Extending this to all our stores across Britain is an exciting step and we’re hoping this charge will remind customers to rethink their use of single-use plastic as it has with plastic bags.”