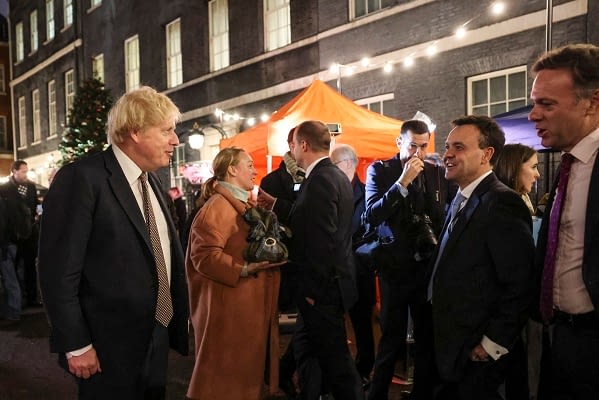 Two thirds (66%) of UK adults say that Boris Johnson should resign after allegations of the Prime Minister and his wife Carrie Johnson attended a social drinks gathering in the No.10 garden during the first coronavirus lockdown emerged, according to a new snap opinion poll from Savanta ComRes.

More worryingly, two in five (42%) 2019 Conservative voters say that the Prime Minister, who has so far neither confirmed nor denied his attendance at the event, should resign.

The snap poll also finds that almost two thirds of the public (62%) say that this new story is a worse breach of trust than the Christmas Party scandal that contributed to the Prime Minister’s plummeting poll ratings at the back end of 2021.

And two thirds (65%) also say that Martin Reynolds, the Prime Minister’s Principal Private Secretary, who sent an email inviting over 100 Downing Street staff to the drinks event in the No.10 garden, where staff were encouraged to bring their own drinks and make the most of the weather, should resign.

Elsewhere in the poll, three quarters (77%) say that the Metropolitan Police should formally investigate any alleged breaches of Covid restrictions in No.10 on the 20 May, the day Reynold’s email was sent, while similarly high figures say that the public (86%), people who have lost loved ones to Covid (85%) and the NHS (83%) have been let down by the scandal.

And while further Covid restrictions are looking unlikely, a third (36%) say they’d be less likely to follow the government’s Covid rules as a result of the latest story.

Commenting on the findings, Chris Hopkins, Political Research Director at Savanta ComRes said, “That rope for Boris Johnson just got shorter as the latest allegations of further lockdown breaches in No.10 emerge and, crucially, this time Boris Johnson may lack plausible deniability due to the rumours circling that he and his wife attended the drinks event on 20 May while the rest of the country were restricted to meeting just one other person socially outdoors.

“A 12pt increase in those saying he should resign compared to Christmas Partygate is significant, but ultimately it’s not the court of public opinion that Johnson will be tried in; it’s his own party.

“If, as in December, this scandal leads to the Conservative vote share collapsing in the opinion polls, the doubts among those who used to see Johnson’s electoral successes as his saving grace will no doubt increase, and the major difference between now and early December is that the Tories do not have a poll lead to act as a cushion to break the PM’s fall.

“Increased Labour leads that point to Keir Starmer in No.10 really could see Tory backbenchers get tetchy, and they may start the wheels in motion to replace Johnson as Prime Minister.”