CLICK HERE TO WATCH THE FULL VIDEO
Home Business News Police could investigate No.10 ‘BYOB’ lockdown party which could be extraordinarily serious’ for Boris Johnson 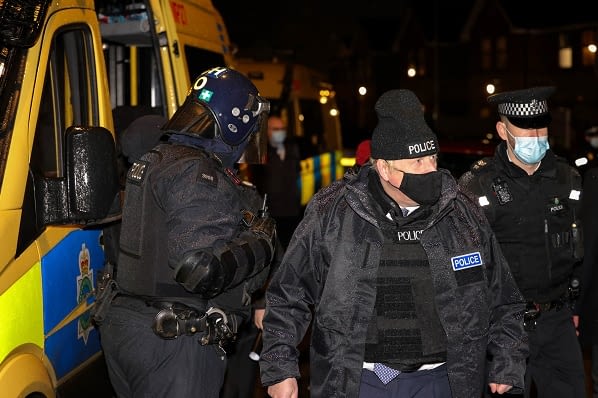 Police could investigate No.10 ‘BYOB’ lockdown party which could be extraordinarily serious’ for Boris Johnson

An email has emerged which shows that more than 100 Downing Street staff were invited to “bring your own booze” for a drinks party in Boris Johnson’s garden at No.10 during the first lockdown.

The Metropolitan Police are now considering to investigate the “alleged breaches” that took place in the Prime Minister’s own garden.

“The Metropolitan Police Service is aware of widespread reporting relating to alleged breaches of the Health Protection Regulations at Downing Street on May 20, 2020, and is in contact with the Cabinet Office,” the force said.

Sources told The Telegraph that quite a few Downing Street officials said the event was a “mad idea” at the time.

The Prime Minister is also facing calls to explain to the House of Commons how he came to attend the lockdown booze up.

Lib Dem leader Sir Ed Davey told Sky News that the Downing St party allegations are a “kick in the teeth” for those who sacrificed so much during the pandemic.

Sir Ed also said that if Johnson has broken “the law,” it could be “extraordinarily serious” for him.

Labour’s deputy leader Angela Rayner has also demanded that the Prime Minister appears before MPs in the Commons to answer to the allegations of lockdown parties and that he had misled Parliament with previous denials.

Johnson’s Principal Private Secretary Martin Reynolds wrote in the email marked ‘official sensitive, No10 only,’ “Hi all, after what has been an incredibly busy period it would be nice to make the most of the lovely weather and have some socially distanced drinks in the No10 garden this evening.

“Please join us from 6pm and bring your own booze!”

A source told Sky News that Reynolds’ job was to protect Downing Street staff from the spread of the virus to which he had failed to do so.

The source said, “The public are right to be outraged at the ‘one rule for them, one rule for us’.”

The source added, “He [Reynolds] was in charge of it all. He has to be held accountable for it.”

Reynolds has been tipped by MPs as the fall guy for the party fiasco as it now appears his position is untenable.

The Liberal Democrats’ Home Affairs spokesperson Alistair Carmichael who backs a police investigation said, “This garden party looks like a clear breach of lockdown rules at a time the public were being ordered to stay at home.

“Boris Johnson himself said just days after this party that the police should step in to stop people holding outdoor gatherings. It would absolutely reek of double standards if the police don’t investigate these allegations in full.

“We must get to the bottom of this. If rules were broken, those responsible should face the full force of the law.”

Angela Rayner, Deputy Leader of the Labour Party said, “The series of revelations about parties and other events at Downing Street have made a mockery of all who diligently followed the rules – often at great personal cost,” she said.

“Boris Johnson repeatedly claimed that no rules were broken in Number 10 but the truth is out. He misled the public and misled the House.

“Of course it’s right there’s an inquiry but we shouldn’t need that for the prime minister to tell the truth.

“Boris Johnson should come to the House of Commons today and finally come clean.”

SNP Westminster Leader Ian Blackford MP said, “Boris Johnson must come clean and admit whether he attended, or was aware of, this Covid rule-breaking party in his own back garden.

“People will find it utterly outrageous that while the rest of us were banned from public gatherings, the most powerful people in the Tory government were boozing up at No 10 Downing Street – proving yet again, that it’s one rule for them and another for the rest of us.

“Boris Johnson’s Tory government is the most corrupt in decades. If the Prime Minister had a shred of integrity or an ounce of shame, he would have resigned many months ago. He has no moral authority left, and as he won’t go – his Tory MPs have a duty to remove him from power.”