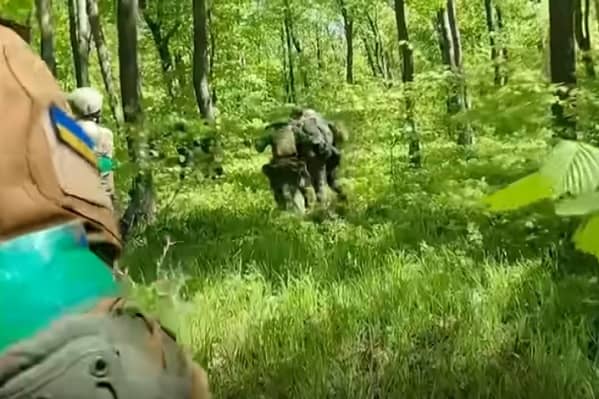 Ben Grant who is a former Royal Marine Commando left the UK to go and fight with the Ukrainian forces has killed a Chechen commander in a fierce firefight and is now wanted.

Ben, 30, is the son of Conservative MP Helen Grant who is the Prime Minister Boris Johnson’s special envoy on girls education joined the Ukrainian Foreign Legion in March.

Grant who was wearing a helmet mounted camera shows them being in an ambush and then fired a shoulder mounted rocket launcher at a Russian armored vehicle.

Grant can be heard shouting orders, “We’ve got to move now or we’re gonna die!”

He is then heard shouting, “shoot it now” as the rocket launcher is then fired.

Russia’s National Guard says Sgt. Adam Bisultanov, the commander of a separate operational brigade of the North Caucasus District of the National Guard, was killed in the “attack.

Russian forces said that a “group of mercenaries from Great Britain and the US” are responsible.

The National Guard said in a statement, “During protective fire, the armored personnel carrier in which [Bisultanov] was located took three hits from a grenade launcher and was wrecked.

“The GoPro camera captured footage of the attack and one of the fighters of the mercenary group, the son of British MP Ben Grant,” the statement said.

The statement added, the GoPro video will be provided to military investigators and Russia’s Investigative Committee announced last week that are investigating the British mercenary for his role “leading” the ambush killing the Chechen commander.

Russian media have reported that Grant’s role in the ambush which killed the Chechen commander will see him facing the “death penalty” in Donetsk.

Komsonolskaya Pravda wrote, “he will have to run for the rest of his life,” after killing Bisultanov who was Chechen born, the newspaper noted, “where the principle of blood feud or vendetta is not empty words.”