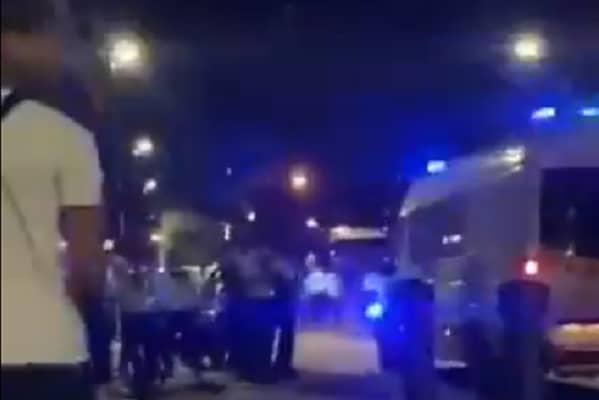 On Wednesday night a street party in Brixton descended into extreme violence with 22 police officers injured and two in hospital.

The Metropolitan Police were confronted by extreme violence as footage on social media shows people smashing up a police car, attacking police vans and a man can be seen waving a sword at officers.

Scotland Yard said their officer were confronted by a large “hostile” crowd when they attempted to break up a an “unlicensed block party.”

Four people have been arrested and are in custody for public order offences.

Disgraceful scenes can be seen on social media with one video showing a man chasing police away saying, don’t come round here bro … this is what we do.”

Another person can be heard saying, The police are getting run out of here,” an another person said, “They’ve finished the car. My Lord the police have abandoned their own car.”

The police said in a statement, “Police were called to Cecilia Road, Lambeth on the evening of Wednesday, 24 June to multiple reports of a large unlicensed music event in the street.

“Officers attended to encourage the crowd to leave the location but they did not engage with police.

“The event continued and more officers attended the scene and the group became hostile towards officers.”

They added: “The event was cleared in the early hours of Thursday, 25 June.

“A section 60 was later implemented in the vicinity of the event to prevent violence.”

Home Secretary Priti Patel said on Twitter, “Just last weekend, the whole country came together to praise our heroic police officers for putting their own lives on the line to keep us safe.

“I’ll be picking up with the Met Commissioner immediately.”

The Sue Gray report is so ‘excoriating’ for Boris Johnson...

Tory MPs ‘must kick PM out of Downing Street once...