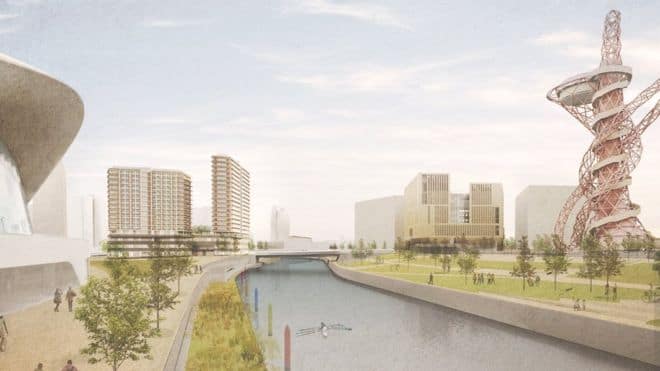 The Mayor of London, Sadiq Khan, today set out his £1.1bn vision for East Bank at Queen Elizabeth Olympic Park – a new powerhouse of culture, education, innovation and growth, and welcomed a £151m contribution now secured by the Government.

Sadiq unveiled new plans and building designs for Sadler’s Wells, London College of Fashion (part of University of the Arts London) and the V&A including a partnership with the Smithsonian Institution, across Stratford Waterfront.

He revealed that the BBC will join the list of prestigious institutions that make up the area, to create a new home for the world-renowned BBC Symphony Orchestra & Chorus and BBC Singers, with a substantial presence from the BBC Concert Orchestra as well as state-of-the-art recording facilities to host recording sessions and live performances across all genres from global stars to emerging talent. The BBC will also bring the Proms to the area, with both performances and opportunities for young people from east London to participate in choirs and ensembles.

East Bank will also be home to a new site for UCL (University College London), creating a new and pioneering campus, UCL East.

East Bank will be spread across three sites – UCL East (UCL’s new campus), Stratford Waterfront (BBC, the V&A including a partnership with the Smithsonian Institution, Sadler’s Wells and UAL’s London College of Fashion) and Here East (the V&A’s new Collection and Research Centre, and an existing space for UCL).