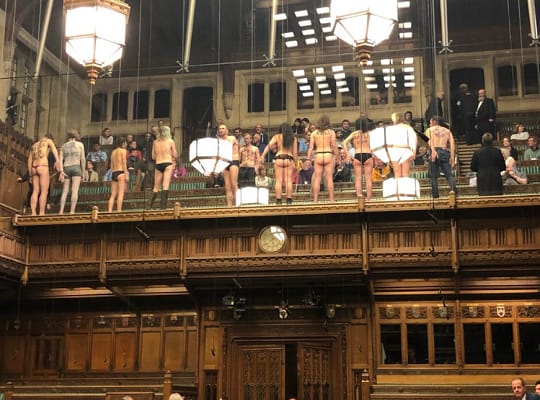 Whilst the House of Commons were debating Brexit a group of semi naked climate change protestors pressed themselves against the glass screen of the public gallery.

Around a dozen of protestors stripped to their underpants showing the words painted on their backs “climate justice now.”

The incident lasted for some 25 minutes with their hands glued to the glass partition, they were later removed by police, 12 were arrested for “outraging public decency.”

Several MPs could not stop looking including Ed Milliband whilst the Peter Kyle MP was in full swing over his Brexit debate.

.@Ed_Miliband reacting to the nudists in parliament may be my favourite thing about #brexit #indicativevotes2 pic.twitter.com/uWxF7OhMJC

The group calling themselves the Extinction Rebellion said they wanted to “draw politicians’ attention to the climate and ecological crisis.”