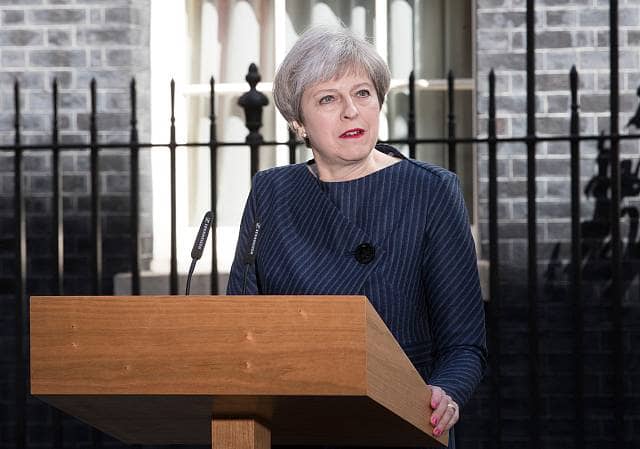 Here’s what she said

Prime Minister Theresa May has given a brief statement after leaving Buckingham Palace having asked the Queen if she can form a government.

In a Brexit focused speech, she said: “I will now form a government – a government that can provide certainty and lead Britain forward at this critical time for our country.”

She said that her government will guide the country through the Brexit negotiations that are due to begin in just 10 days which will continue to the existing timetable.

Confirming what was predicted she said she will be forming a minority government with an alliance with the Democratic Unionist party as it was “clear that only the Conservative & Unionist Party has the legitimacy and ability to provide that certainty.”

She promised that she would secure a new partnership with the EU that works for everyone and brings prosperity, she said: “That’s what people voted for last June. That’s what we will deliver. Now let’s get to work.”

Here is her speech in full: “I have just been to see Her Majesty the Queen, and I will now form a government – a government that can provide certainty and lead Britain forward at this critical time for our country.

“This Government will guide the country through the crucial Brexit talks that begin in just 10 days and deliver on the will of the British people by taking the United Kingdom out of the European Union.

“It will work to keep our nation safe and secure by delivering the change that I set out following the appalling attacks in Manchester and London – cracking down on the ideology of Islamist extremism and all those who support it. And giving the police and the authorities the powers they need to keep our country safe.

“What the country needs more than ever is certainty, and having secured the largest number of votes and the greatest number of seats in the General Election, it is clear that only the Conservative & Unionist Party has the legitimacy and ability to provide that certainty by commanding a majority in the House of Commons.

“As we do, we will continue to work with our friends and allies in the Democratic Unionist Party in particular.

“Our two parties have enjoyed a strong relationship over many years, and this gives me the confidence to believe that we will be able to work together in the interests of the whole United Kingdom.

“This will allow us to come together as a country and channel our energies towards a successful Brexit deal that works for everyone in this country – securing a new partnership with the EU which guarantees our long-term prosperity. That’s what people voted for last June. That’s what we will deliver. Now let’s get to work.”