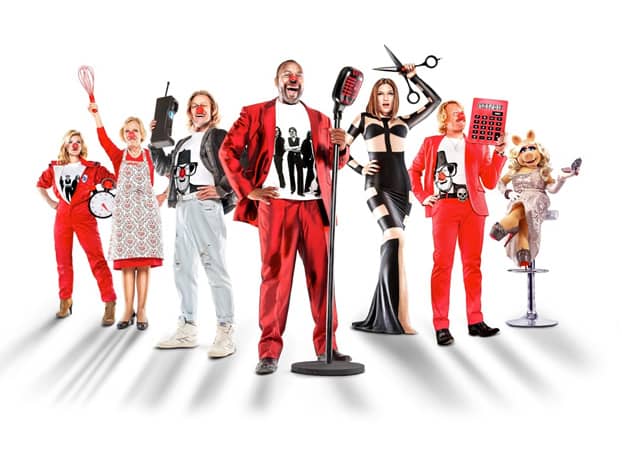 Have a fabulously fun Friday AND raise money for charity. Get involved!

What: “Come and challenge us to a game of ping pong in aid of Comic Relief. The rules are simple, pay £2 to play and if you beat us, we’ll match your donation! Delicious sweet treats will also be available for a small donation.”

Where and when:  9am – 6pm (today only), Ping England Outdoor Tables, Soho Square, London W1D 4NR

What: Top London chefs will be competing for the blue ribbon at Leadenhall Market

Where and when: 3pm today, Leadenhall Market

What: “We’re partnering up with Devonshire Square to raise money for Comic Relief with ‘The Red Nose Jukebox’! Over the course of four hours, residents, office and retail workers from Devonshire Square will have the chance to take the mic either by themselves, or with a group of colleagues, and sing their chosen karaoke track! With each performance, a £5 donation will be requested for the pot, which aims to build to a huge £2,000 throughout the day!”

Where and when: Lucky Voice, Devonshire Square, EC2M

What: “All roads once led to Rome…. Now they lead to London. In terms of rock ‘n’ roll this is an inarguable fact. Big bucks may well be made in Hollywood – but rock’n’roll reputations are made here in The Big Smoke. The cast list of this NEW London Walk reads like a who’s who of the music: The Beatles, The Rolling Stones, The Who, Pink Floyd, Jimi Hendrix, David Bowie, The Sex Pistols, The Clash, Blur and Oasis. Amongst others. Each act has a London tale to tell, often a tale so decadent that Caligula himself would blush!* London Calling. Lend an ear.” (*With thanks to Morrissey).”

Where and when: 2pm (today), Tottenham Court Road Station (Exit 3)

What: Good old Stella McCartney has designed a range of funky T-shirts, featuring the likes of Tommy Cooper, Marilyn Monroe, best mate Kate Moss, the Beatles and a cute baby giraffe – each adorned with a red nose, naturally

A bit of phone fun: Fart app, by The Giving Lab

What: “Comic Relief and TheGivingLab have just created Britain’s Biggest Fart app  for Red Nose Day in Shoreditch, London. The Android/iPhone app is built on The Giving Labs API. Be proud to parp. Get the biggest fart in Britain and a place on the Fart Rank for Red Nose Day 2013. Just download the app and start sharing your personal SMS fart code on Facebook. For a £1 donation (plus standard network rate), your friends can text you a fart. Every one triggers a sound on your phone. And the more you get, the bigger your fart. You can even unlock special achievements.”

Sainsbury, Branson & billionaire Brits to donate half their fortunes