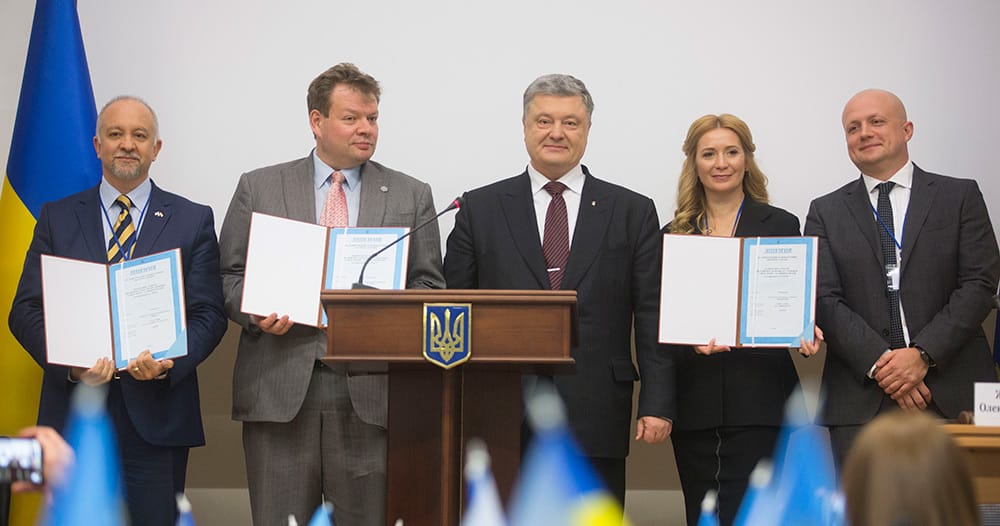 Petro Poroshenko has announced the bridging of digital gap by Ukraine

Mobile communications of the fourth generation is finally coming to Ukraine.

That will give a new impetus to the development of the Ukrainian economy and bring it closer towards the European Digital Single Market.

The President of Ukraine Petro Poroshenko announced his intention at the tender for 4G (LTE) frequency bands to contribute to the technological upgrade of Ukraine. “We implemented 3G within four years and have already started launching 4G. The then-and-now difference is similar to the seats in a rail trolley and a modern express train”. As the President said the investments to the next generation of mobile communications will amount to no less than UAH 20 billion. “It shows the faith of investors in Ukraine and our reforms,” he concluded.

The President compared the importance of 4G tender with the ratification of the Association Agreement between Ukraine and the European Union and the introduction of visa-free travel, and also noted its transparency and efficiency. “These are the steps aimed at demonstrating an effective fight against corruption,” the Head of the State summed up.

As it is known that due to the corruption schemes of Yanukovych’s team, Ukraine has considerably lagged behind the European countries in the launch not only 4G network, but 3G network as well.

4G gives a chance to Ukraine to overcome digital inequality and bring the high-speed Internet to the most inaccessible places. Currently, it is one of the most pressing all-European challenges. In addition to the extra revenues gained from the sale of new licenses, the state will also receive indirect income. After all, according to estimates of the World Bank experts, the increase in penetration of high-speed Internet by 10% leads to GDP growth by 1.38%.

The final tender for 4G (LTE) in the 1800 MHz band was held on March 6 in Ukraine. The Big Three mobile communications operators, namely Vodafone Ukraine, Kyivstar and Lifecell became the winners. The companies will pay in total UAH 8 billion (about USD 308 million) to the state budget for the frequency licenses.

“I expect that we will launch 4G in the 2600 MHz band at the end of March, if nothing happens. In the 1800 MHz band – early July,” CEO of Vodafone Ukraine Olga Ustynova predicted.