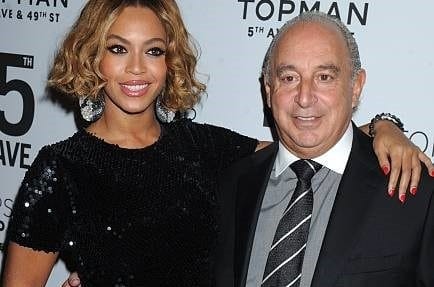 Beyoncé has ended her clothing venture with Topshop boss Philip Green by buying him out of Ivy Park, the clothing label they founded together.

The pair launched Ivy Park in 2016. The first range of tops, sports bras and leggings was modelled by Beyoncé herself.

In a statement today, Ivy Park said: “After discussions of almost a year, Parkwood has acquired 100% of the Ivy Park brand. Topshop – Arcadia will fulfil the existing orders.”

The development comes after disturbing allegations have surfaced against Sir Green. In October, the tycoon was named in Parliament as the person accused of inappropriate conduct, including sexual harassment, bullying and racial abuse.

Sir Green, however, “categorically and wholly” denies the allegations.

Arcadia’s future hangs in the balance and ‘there’s no tears...

Philip Green to put an extra £25m into Arcadia’s pension...