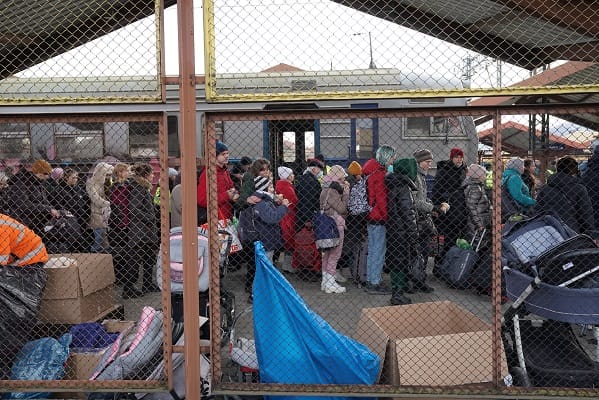 The Rejoin EU Party once more deplores the fact that UK Home Secretary Priti Patel still does not seem to sympathise with our fellow Europeans fleeing Putin’s storm troopers.

Her Home Office has so far reportedly issued just 500 visas to Ukrainian refugees in the crisis and plans to set up a visa centre in Lille – 70 miles away from Calais.

Patel and her ministers have even faced ridicule from their own parliamentary colleagues for blaming the threat of potentially fraudulent visa applications and a new Salisbury-style poison attack for chaos and delays in setting up the visa system.

Meanwhile, governments of EU member states continue to show compassion and generosity in the face of the Ukrainians’ plight, with Ireland reportedly committing to take 100,000 refugees, more than 2,000 of whom Dublin has already admitted.

And as if UK government incompetence and foot-dragging were not bad enough, Brexit is also apparently frustrating ordinary Britons’ efforts to send aid to Ukraine, with claims that supplies donated by individuals and charities are spending days stuck at Dover due to post-Brexit checks.

Party leader Richard Hewison said, “Brexit thinking clearly continues to cloud the Home Secretary’s thinking and sap her capacity even for the simplest sense of a shared humanity.

“Especially since this slow pace of processing is in sharp contrast to the assiduous alacrity with which 72 requests for golden investor visas for wealthy Russians last year were approved.

“We were told Brexit would reduce red tape – now we learn it’s hindering aid efforts and being used as an excuse by the government for failing to help Ukraine in its hour of need. This is an embarrassment to Britain.”