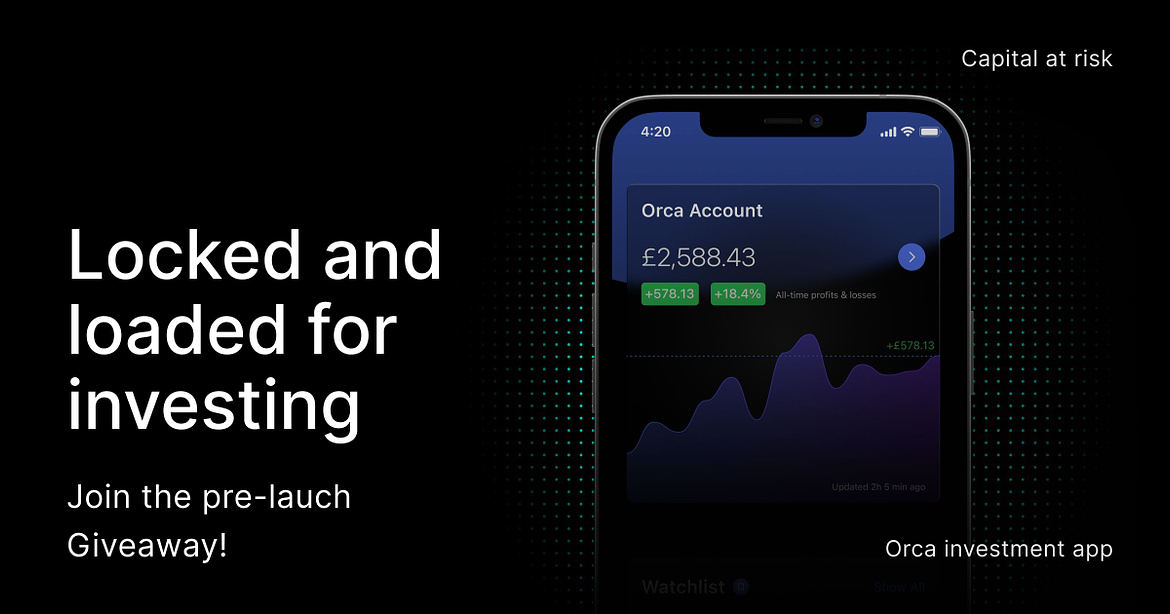 Orca, an investing mobile app, is running a pre-launch giveaway in December

Orca, a new investing mobile app, is set to be launched in December. The team at the app will run a pre-launch giveaway with the total prize of 15,000 GBP right before the app goes live.

A new investment app, Orca, is set to be officially released in December. The app is currently available for the residents of the UK. The team at Orca is about to conduct a Giveaway before the official launch with 15,000 GBP worth in shares on the London Stock Exchange as a total prize fund.

Orca is currently available on Google Play and the App Store only as a Waitlist. Basically, it is a virtual queue of registered users. A user can move through this queue by completing specific tasks. The users from the top-100 will get a chance to win up to 2,750 GBP worth in shares from LSE. The Top 10 on the Waitlist will each get stocks worth 200 GBP; those from 11th to 100th place will receive 100 GBP each in shares. One randomly selected user from the Top 10 will be awarded 2,750 GBP worth in shares, while another one from the Top-100 will get 1,250 GBP in stocks.

To reach the top-100, the user can do a lot of things, such as follow Orca on social media, verify their account in the app, invite friends to join the Waitlist, and test the Alpha version. The more tasks the user completes, the higher their position in the Waitlist.

Orca’s CEO, Denis Gulagin, and CPO, Fyodor Panteleev, have run the Giveaway to introduce the public to Orca with Orca and enable them to win shares and benefit from investing.

“Investing is still a complicated thing for a lot of people. We analyzed similar applications and came to the conclusion that a lot of users give up on investing in the case of the first unsuccessful experience which caused money loss. We suppose that the Giveaway is a good starting point not only for our users as a means to jumpstart their investing experience but also for Orca as a means to promote the brand.”, Gulagin said.

Currently, Orca has 6,000 participants in the Waitlist. The app has been downloaded over 10,000 times, even though the final version is not yet released. Orca welcomes newcomers, the product team wants to build a new community of users who want to learn to invest mindfully.

Orca’s Alpha version is already available by request where users can try investing simulation with a virtual balance. The Alpha was tested by 500 volunteers, including bloggers and journalists.

The app is now passing the final stage of the alpha testing and will be available as a Beta on demand in December. The main difference between Orca’s alpha and beta versions is that the Beta will have a full scope of features and enable users to invest real money by placing orders for stocks listed on the LSE.

ORCA is an all-in-one investment app which enables users to buy over 250 assets traded on the LSE, gather stats on them, monitor the stock market in real-time, read industry news, and learn to invest if a user has no experience.

In the near future, the project team wants to add assets traded on NYSE and NASDAQ as well.