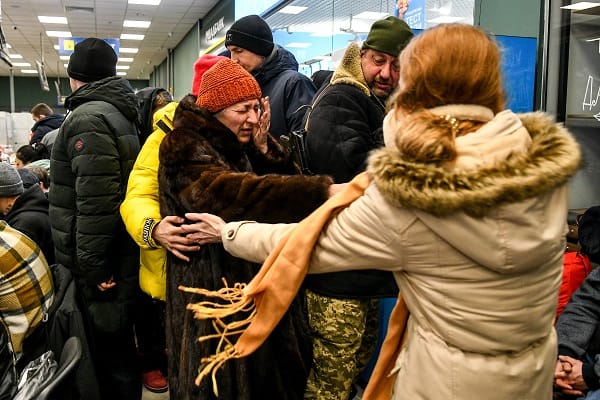 A young widowed Ukrainian woman has described how her “life was stolen” as her husband was killed in Ukraine fighting against Russian troops.

She shared a heartbreaking Facebook post, saying that her “life lies next to me in a closed coffin” after tragically losing her husband.

Irina Sushkova’s husband Victor Sushkov who was 30-years old, was killed while serving in the Ukrainian Air Force following the invasion of Russia.

She wrote on Facebook, “I’m sitting next to my dead husband. My life lies next to me in a closed coffin.

“My life that wiped my tears and said she would never leave… It’s like I don’t exist any more.”

She said her loving husband was as a “pure, kind and worthy man,” and she added, he was “the best in everything.”

She emotionally described what she wanted to give him for their first wedding anniversary, and now all she can give him is a “wreath for the grave.”

Sushkova who is 25, wrote, “I knew how unbearable we would be in our old age… I knew what eyes our children would have.

“I thought a long time ago what to give you for your first wedding anniversary. And I had to choose a wreath for the grave.

“The last conversation you said you were guarding my sleep. Now I will guard yours for the rest of my life.”

She continued, “I curse these fascists for you, my dear, for our unborn children with you, for the stolen life, yours and mine.