Home Business NewsBusiness What makes 'The Golden Triangle' a top choice for business? 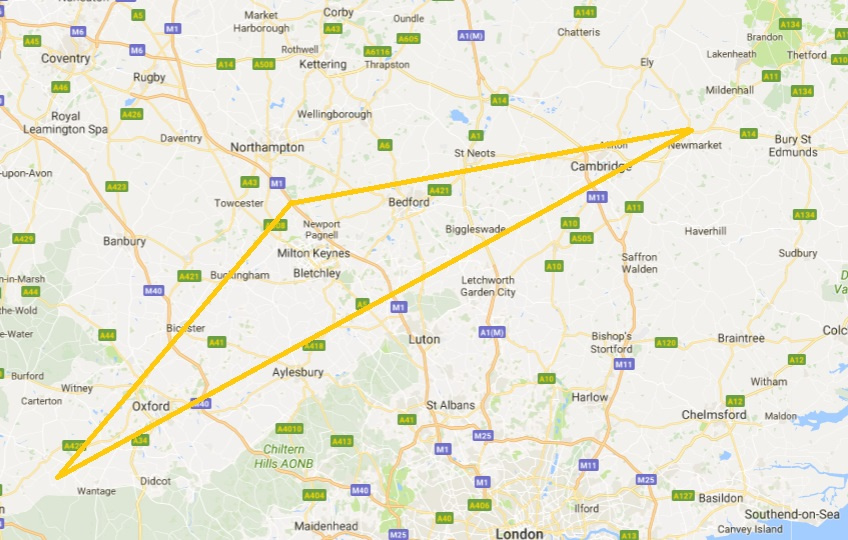 What makes 'The Golden Triangle' a top choice for business?

London is internationally renowned as a business centre, particularly for financial services, the creative industry and its appeal to technology firms. However new research reveals that Oxford, Cambridge, and Milton Keynes are on track to becoming the UK’s most innovative and entrepreneurial cities according to new reseach from Bidwells.

Glassdoor’s 2017 study of the 25 Best UK Towns & Cities to Work In noted similar growth in these cities, with Cambridge, Milton Keynes, and Oxford ranked 3rd, 8th and 10th respectively.

Despite Brexit fears, business is continuing to invest in the region, with more than 50 per cent of commercial property purchases over the first half of this year made by overseas investors, and here’s why:

Milton Keynes ranks fourth in the UK for its start-up rate, a recent report by Centre For Cities revealed, with the fast-growing city also ranked third in the UK for having the highest number of businesses.

In the European Digital City Index’s analysis of the digital entrepreneurial landscape of 60 cities across Europe:

The study also found that more patents are published in Cambridge than in any other city in the UK. And with 80 per cent of the start-ups still in business after three years, it is proving to be a stable area for new firms.

Best places for employees to work in

Currently, Milton Keynes is the number one area in the UK contributing to employment growth and job creation, and has added 9,300 jobs to the banking, finance, and insurance sector between 2013 and 2016. Ranked in accordance to highest weekly workplace wages, Milton Keynes is ranked fourth, above its top city competitors – with Cambridge fifth, and Oxford tenth.

In Cambridge, the UK’s most innovative city according to Centre For Cities, more than 21,645 jobs are currently available. Investments such as Granta Park will see employment expand, with this project alone set to increase jobs from 2,500 to 4,000 in the park, and workspace amounting to well over 1 million sq. ft.

Approximately 67 per cent of Oxford jobs are centred exclusively on knowledge-intensive industries, including financial, technology, science, and biotech, making this a prime choice for employees wanting to be at the forefront of new developments in these sectors.

Bidwells partner and head of Business Space Agency, Dick Wise, concludes: “The Golden Triangle is predicted to see peak growth in the next five years, due to the cluster of top talent, businesses, housing, and the development of the new varsity line expressway.

Property in Cambridge, Milton Keynes, and Oxford have great growth prospects, and as supply continues to tighten, and more A-space becomes available, doing business in the Golden Triangle will see significant expansion and strong returns by 2019/20.”