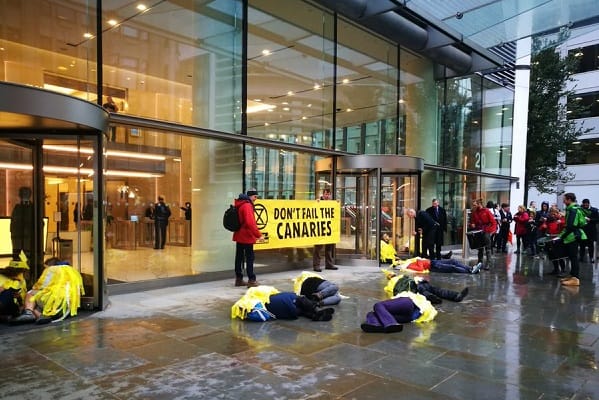 Extinction Rebellion (XR) have targeted the City of London and the Walkie Talkie building is in lockdown as activists have glued themselves to the entrance.

The Walkie Talkie building in Fenchurch Street is home to some of the UK’s largest insurers. XR said the building has been targeted over the financing of fossil fuel funding.

In tweet XR said, “The Walkie Talkie building – home to many of the world’s insurance companies – has been shut down by our rebels as part of a day of action against the financial sector for its key role in financing fossil fuel expansion & the climate & ecological emergency.”

The group claim more than $5tn has been invested in fossil fuels by London banks and are demanding the government makes these investments illegal.

Protesters stood and sat in the road outside the Bank of England on Threadneedle Street in early morning rush hour bringing traffic to a standstill.

The police have warned that protesters will be arrested under a Section 40 order for obstructing traffic if they do not leave.

Since last Monday more than 1,336 Extinction Rebellion protesters have been arrested.