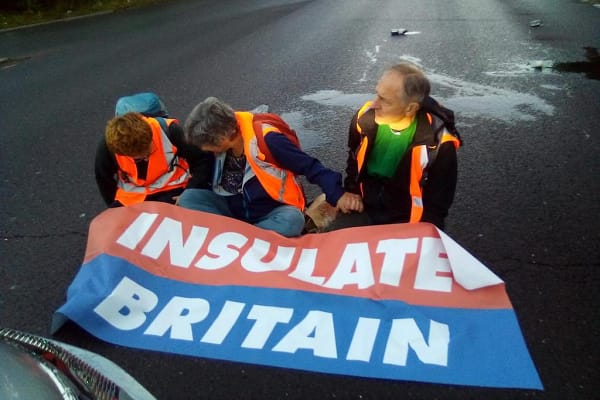 Insulate Britain attempted to block the M25 and also blocked motorists in Manchester and Birmingham with some having glued themselves to the tarmac.

This is the groups eighth week of causing more disruption for motorists as they descended on the South Mimms roundabout at Junction 23, Junction 6 of the M56 near to Manchester Airport and also on the A4400 in Birmingham.

Police cleared the activists and lifted them into the back of a police van and at least one person was detained at the scene.

The group said that today marks the 17th time that they have caused chaos for motorists and added that 161 people have taken part and there has been 770 arrests, with most of them having been arrested many times.

Gabby, 27, a graphic designer from Norwich said, “We are taking our message to people outside of London because we want everyone to know that our government is killing our children.

“Britain should be leading the world with radical plans to decarbonise our society, instead our government is actively setting policies that will drive emissions higher.

“The public can close their eyes but this isn’t going away, no one is coming to save you.”

In a statement on Twitter, Hertfordshire Police said, “Officers are at the scene and working to resolve the disruption as quickly as possible.

“Several people have been arrested.”

Charlotte Lynch said on Twitter: “Police are now carrying the failed protestors into vans. Two of them are glued to the pavement. A 13th protestor who was under restraint, an elderly man, has now also been arrested.”