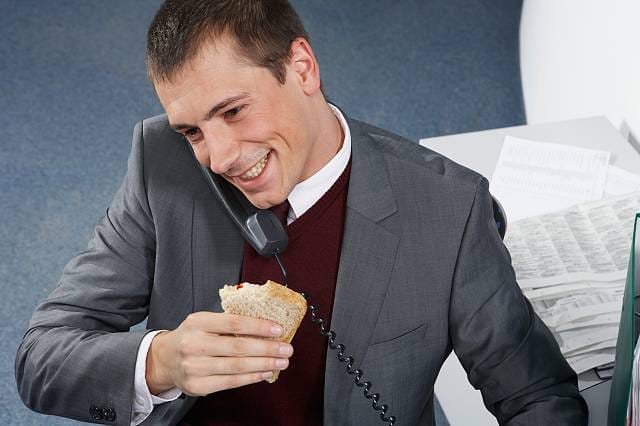 Metro Bank, the revolution in British banking, has found that a staggering six million workers in the UK (one in 10) never take a lunchbreak. Among those who do manage to take a breather, a whopping 57 per cent take half an hour or less and a fifth take 20 minutes or less.

For those who, when lunchtime comes, can’t quite peel themselves away from work, more than a third blame not having enough time and just over a fifth describe preferring to eat lunch in the office.

According to psychologist and author of The Anxiety Journal, Corinne Sweet: “In our frantic 24/7 life today, it is absolutely essential for Brits’ health and mental well-being to take a break and get out into the light and fresh air, no matter what. Employers need to encourage daily ‘sanity breaks’ and a real effort has to be made to go against the culture of being tied to the desk. Productivity goes up when employees take a break. This is equally important for the self-employed, who may get much-needed social contact or physical exercise, by going out of the house for a brief break at lunchtime.”

Men make a meal of it

When delving into who misses out on a well-deserved lunchbreak, more women (23 per cent) fail to break for lunch, compared to a mere 15 per cent of men. In fact, 41 per cent of men manage to take time out five or more times a week.

For cities and regions across Britain, Metro Bank found the following:

Among different industries there were some big variances, with workers in the arts and entertainment sector being the most likely to work on through lunch (33%), followed by those in health (27%) and education (26%). On the other hand, over half of those working in manufacturing say that they take a lunch break five or more times a week (53%).

What’s more, over a million self-employed Brits never take a lunchbreak, with a fifth (21%) taking 20 minutes or less to recharge their batteries before they return to work. When comparing how lunchbreaks are spent, those who are self-employed or freelance are three times as likely to feel relaxed with the tasks that they get done during this time, than those who don’t work for themselves (17% vs 5% respectively).

The self-employed also tend to use their lunchbreak for more physical exercise, such as taking a walk (10%) compared to salaried-workers (3%). Those that work for themselves however also appear to feel more pressure to be productive during their lunchbreak compared to their employed counterparts (13% vs. 7% respectively).

Iain Kirkpatrick, Managing Director Retail Banking at Metro Bank said: “Gone are the days when an hour’s break was the norm. Although taking time out is essential to a healthy work-life balance, we know that pressures and workloads can often dictate otherwise.

“That’s why we don’t force our customers to use what little time they have away from their work to do their banking. Instead, if they want to come and see us, we’re open early in the morning to late at night, at weekends and bank holidays. Customers’ lives have changed, that’s why we’re open at their convenience, not ours.”