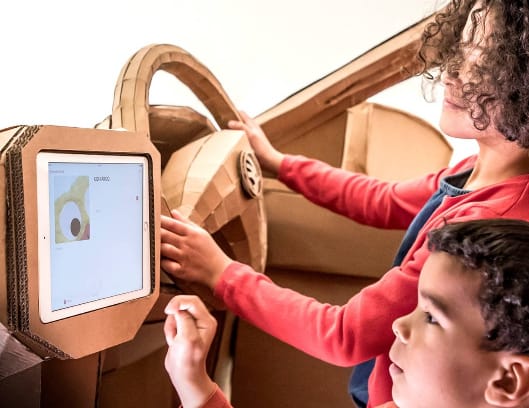 ŠKODA creates the world’s most child-friendly SUV… from cardboard

Known for some of the most family-friendly cars in the business, ŠKODA has taken things a step further with the creation of a special one-off Karoq made entirely from cardboard. The handmade ‘Kid Karoq’ has been designed as the perfect play area for those who aren’t quite old enough to enjoy the many grown-up toys available in the brand’s all-new compact SUV.

The life-size cardboard creation took 10 weeks and more than 600 hours to construct by British design studio, Lazerian, and has been built to the exact scale of the real Karoq: 4.4 metres long and 1.6 metres tall.

Commissioned by ŠKODA UK to celebrate the launch of the new compact SUV, which goes on sale in the UK on 11 January 2018, the brand drew inspiration for the cardboard version from 1,000 kids aged 6 to 11 – who told ŠKODA what features they’d pack into their perfect car.

Among the highest polling responses from the kids’ survey were the ability to play music of their choice (42.5 per cent), a tablet to play and stream programmes on (67.6 per cent), and an integrated movie projector (35.4 per cent) – ideal to watch family favourites.

The research further highlighted that kids’ imaginations are as active as ever – almost three-quarters (73.5 per cent) of children surveyed said that they have built their own cardboard creations.

Inside, the Kid Karoq has everything the children asked for – plus some additional goodies. Mini-motorists can climb into a hand-crafted driver’s seat and play with a portable games console installed in the dash display.

The cardboard centre console also houses a digital tablet that controls a set of wireless Canton speakers, and mirrors many of the features found in the real Karoq’s 9.2-inch Columbus infotainment system. This means they can choose the music without pesky grown-ups changing the track. In the absence of the LED ambient lighting found in the real Karoq, children can dance the day away under a multi-coloured disco ball.