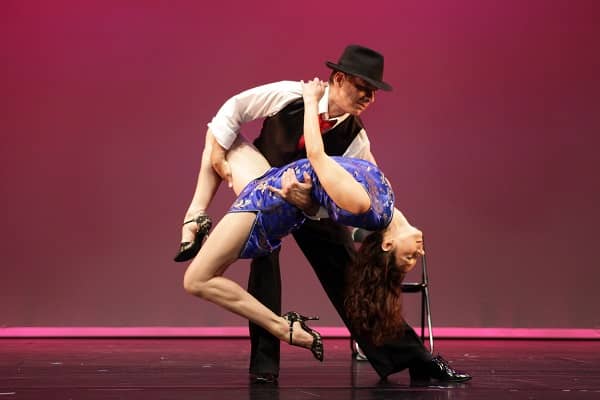 New research has revealed that Diane Buswell is the most influential professional dancer on this year’s Strictly Come Dancing, potentially earning £3,355 per sponsored Instagram post.

This would mean that the Australian pro dancer would only need to be paid for 15 sponsored posts to make the equivalent of her Strictly salary, which is £50,000.

It’s likely that her relationship with ex-Strictly partner and YouTube star Joe Sugg is largely to do with her influential social media presence.

The study, which was conducted by beauty comparison site Cosmetify, analysed the Instagram profiles of all of the show’s professional dancers and used marketing calculators to work out how much they could be paid per sponsored post, finding Buswell in first place, with more than 840,000 followers.

That’s nearly 200,000 more followers than second-place Gorka Marquez, who’s in a position to charge just under £2,600 per post. That’s on top of revenue from solo projects and the £50,000 fee he makes from the BBC’s hit dancing show.

Before they became Strictly professionals, both Buswell and Marquez travelled all over the world with touring dance company Burn the Floor. Buswell became a professional dancer when she joined them at the age of 21, while Marquez turned pro at age 12. He represented his home country of Spain at the World Latin Championships in 2010, as well as reaching the semi-finals of the 2012 World DanceSport Federation World Cup, and then went on to become one of Burn the Floor’s leads.

Although she landed the position of professional dancer on the fifteenth season of Australia’s Dancing with the Stars, Buswell returned to Burn the Floor when she was eliminated from the show. Then, in 2017, she joined Strictly Come Dancing for its fifteenth series and also took part in a Children in Need special the same year. She reached the final with YouTuber Joe Sugg the next year, and has been a professional dancer on the show ever since.

Marquez made his first appearance on Strictly Come Dancing in 2016 and from 2016 to 2018, he partnered with X Factor winner Alexandra Burke and Eastenders actresses Tameka Empson and Maisie Smith. He returned in 2021, making it to week three with Coronation Street actress, Katie McGlynn.

Last year’s winner and The Masked Dancer UK judge, Oti Mabuse, is the third most influential dancer on the show. Thanks to an Instagram following of more than half a million, she can expect to earn just over £2,300 per post.

Following the top three most influential dancers on Strictly Come Dancing is Giovanni Pernice. With a total of 476,128 followers, he has the fourth largest following out of all of this year’s cast of Strictly professionals. This indicates that he should be able to charge nearly £1,900 per sponsored post – and that figure could increase drastically as a result of his new relationship with influencer Maura Higgins, who has more than three million followers.

Aljaž Škorjanec is the fifth most influential professional dancer on Strictly, potentially earning just over £1,850 per sponsored post. The Slovenian dancer and choreographer has 465,896 Instagram followers, which is almost the same as his wife and fellow professional dancer, Janette Manrara.

Manrara left her role as a professional dancer to take over from Zoe Ball as presenter of It Takes Two, so she doesn’t make it onto this list, however she can make over £1,750 per sponsored post, based on her following of 441,751. This means the couple could earn a combined income of more than £3,600 every time they both post sponsored content.

Similarly, the longest running professional, now turned judge, Anton Du Beke, doesn’t feature on this list, but has 245,923 followers on Instagram, meaning he can expect to make nearly £980 per sponsored post.

Who are the most influential dancers on Strictly Come Dancing?

Who are the least influential dancers on Strictly Come Dancing?

Nancy Xu, Luba Mushtuk and Nadiya Bychkova are the three least influential Strictly Come Dancing professionals, according to the research. With less than 150,000 followers each, none of them can expect to make more than £500 per sponsored Instagram post.

As the least influential dancer on Strictly, Xu makes less than £180 per post – that’s nearly 19 times less than Buswell.

Mushtuk might be the second least influential dancer according to this research, but she still has nearly three times more followers than Xu. That means she could potentially charge over £300 for a sponsored post.

Although Bychkova has 26,489 more followers than Mushtuk, she can only expect to be paid just over £450 per Instagram post, which is nearly £3,000 less than Buswell.

However, things can always change for the least influential professional dancers. Commenting on the study, a spokesperson from Cosmetify said: “Each episode of Strictly Come Dancing is viewed by millions, suggesting that the professionals can expect to gain even more followers on social media, which increases opportunities for the dancers outside of the Strictly season.