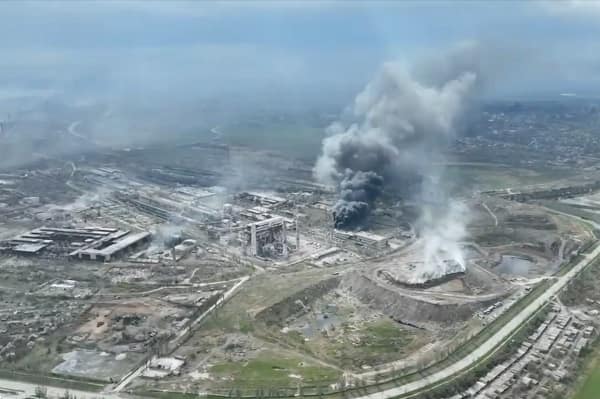 Vladimir Putin’s forces have launched a chemical attack in an overnight raid in the Donetsk region using deadly “phosphorous shells” which “can burn through metal.”

Russian forces are focusing their attacks on Avdiivka which is a settlement in the eastern Donbas region as they continue to keep hold of the separatist regions of Donetsk and Luhansk.

On Wednesday morning the city was bombed with “phosphorous shells” as Russian forces targeted the “centre” with two chemical strikes.

The Head of the Donetsk Regional Military Administration tweeted, “The Russians hit the Avdiivka twice with phosphorous shells!

“Last night in the area of AKHZ, this morning – in the city center. Fires broke out.

“After the second shelling, they launched an airstrike […] aimed at a high-rise building.

“It is known about 1 wounded.”

Dr. Rola Hallam, of Human Rights Watch, wrote, “Incendiary weapons cause devastating burns, and in far worse ways than any of the standard scald or fire burns.”

Dr Hallam added, “They can burn through everything.

“If they can burn through metal, what hope does human flesh have?”

The watchdog said the white form of phosphorus is “notorious for the severity of the injuries it causes.”

Jens Stoltenberg, NATO Secretary-General, has said using chemical weapons against civilians is a “blatant violation of international law” which will  have “far-reaching consequences” which will also “change the nature” of the war.