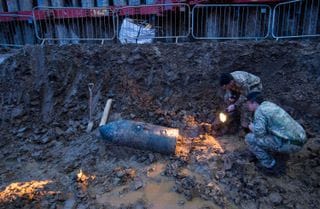 Hundreds of people, schools and businesses were evacuated yesterday with a 200m cordon in place, after an unexploded World War Two bomb was dug up at a building site in Brondesbury Park.

Residents are being looked after by St. Martin’s Church in Kensal Green and the British Red Cross as they were unable to return home over night.

Councillor Carol Shaw, told the Standard “residents may not be able to return home for even longer.”

She said: “The construction firm have been told that it might not be clear for three days.”

The British Army’s bomb disposal team were called to the scene yesterday and have worked throughout the night and is expected to continue until this afternoon. The Police cordon was extended this morning to 300m as Army Bomb Disposal experts are preparing to disarm the 500lb bomb.

The Met Police are unable to provide a time frame for this bomb being safely disposed of, but has said this is a major operation. London Fire Brigade were called with a total of 14 firefighters and 2 fire engines.

Property developer Regal Homes is building a 74 apartments on the bomb site.  A spokesman for Regal Homes said, “Excavations on site at The Avenue, Queen’s Park, have unearthed an object of concern.”

“The health and safety of our team and our neighbours is of course our primary consideration and Regal Homes is cooperating fully with the authorities who are investigating the situation.”

A resident, Roxanne Landripet who lives across from the building sight said, “there fears the road might remain cordoned off for the next two days.”

She went on to describe “panicky” scenes as people were evacuated from their homes.

“There were police banging on people’s doors and then I started to hear a helicopter flying around above the road,” said the 24-year-old receptionist.

“A police officer knocked on my door and told me we had to leave because an unexploded World War Two bomb had been found. There were fire engines, ambulances and police cars everywhere.”

Superintendent Nigel Quantrell of Brent Borough, said: “I would like to thank the community for their continued support as we and our partners deal with this incident.

“I can assure you that we are working very hard resolve the situation. The public’s understanding and cooperation is deeply appreciated.”