Home Business News Ukrainian General warns Putin is preparing ‘an army of a million’ for a mammoth battle along with 200,000 to storm Kyiv from Belarus 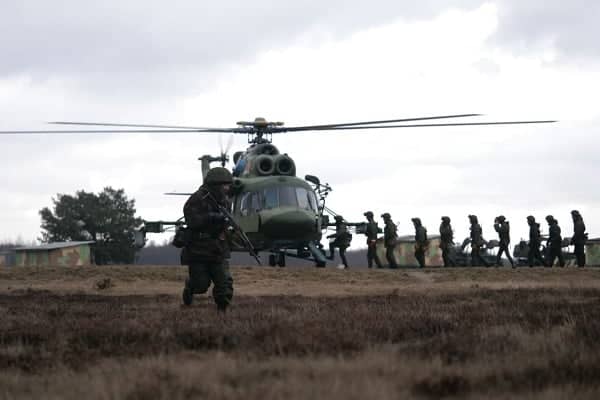 A top Ukrainian General has warned that Vladimir Putin is preparing for a second attempt to capture Kyiv with “an army of a million” soldiers.

Putin’s troops are poorly trained and they have hardly any capable equipment, but despite this Putin it is believed will conscript hundreds of thousands more civilians to capture Kyiv.

Over the past ten months almost 100,000 Russian troops have been slaughtered and it is also thought that around 280,000 have been injured or fled.

It is almost certain that Ukraine has also suffered a large amount of troops being lost in battle,  around 1,000 Russian troops have been taken as prisoners of war.

Major General Andrii Kovalchuk said it is now feared that Moscow have quietly been bulking up the number of his troops to six figures and the Kremlin are going to have a second attempt from Belarus to try and take Ukraine.

The BBC reported that another Ukrainian commander, General Valerii Zaluzhnyi warned that Putin is most likely plotting to attack next year and around 200,000 Russia soldiers based in Belarus could be preparing to storm Kyiv.

Russia’s senior military commissar, Lt-Col Mikhail Fotin said in a TV interview that for the next two years conscription will be extended.

He added that following a “transition period” for the “Back to the USSR” scheme this will continue until spring 2023, which would provide Putin with hundreds of thousands more soldiers for the war in Ukraine.

It is believed that Putin is waiting until the New Year to announce the mass conscription of Russian troops.

“We are preparing for it. We live with the thought that they will attack again. This is our task.

“We are considering a possible offensive from Belarus at the end of February, maybe later.

He said that there has been many whispers that Putin is preparing mass mobilisation which has proved enough for Ukraine to prepare their troops.

Major General Kovalchuk said, “I think Putin is thinking about it. And we cannot rule out such an option. We have to be ready for it.

“It will no longer be the case that they [the Russians] will simply walk in, as was the case on 24 February.

“I believe that our position and the position of our partners today should be clear.

“If Putin carries out a full mobilisation, our partners are ready to provide us with all the force and means to stop not an army of 300,000, but an army of a million.”

He has called on allies to supply more weaponry, longer range missiles to thwart any attack and to win.

Ukraine’s top commander added, “There is a corresponding counteraction to the enemy’s actions.

“We are sure that our partners will help us in this matter – those who want [us] to win. Because it is not only Ukraine winning today, but the entire civilized world. And we must win.”