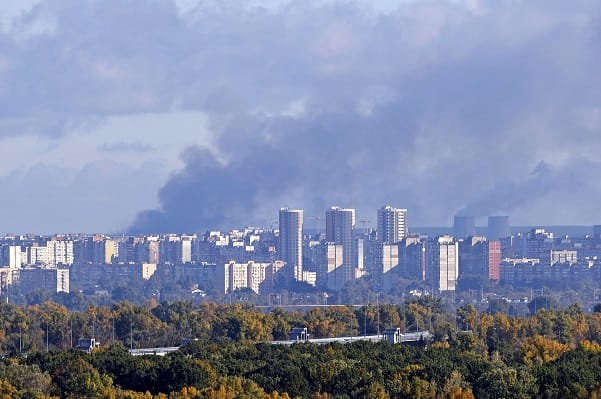 Air raid sirens could be heard across Ukraine and explosions rocked the capital of Kyiv, southern Kryvyi Rih and northeastern Kharkiv on Friday.

The Black Sea region of Odesa, the central cities of Vinnytsia, Poltava, and the northern Sumy region was also bombed.

Authorities of Ukraine’s Dnipropetrovsk region, confirmed that at least two people were killed with many injured in the attack on Kryvyi Rih.

Oleksii Kuleba, head of Kyiv’s regional military administration, said in a post on Telegram, “The enemy is massively attacking.”

“Do not ignore air raid alerts, remain in shelters,” Kyrylo Tymoshenko, deputy head of the President’s office, wrote on the messaging app.

The whole world must see it❗️💥

These are explosions in Ukraine from a plane window in Moldova.

The head of the armed forces, General Valerii Zaluzhnyi, and the chief of ground forces, Colonel General Oleksandr Syrskii, along with the government in Kyiv have warned do not be complacent over Vladimir Putin’s threats.

The Ukrainian defence minister Oleksii Reznikov warned that it is evident Moscow are starting a new wave of attacks.

He has indicated that around 150,000 mobilised troops could be receiving more intense training “to start the next wave of the offensive probably in February.”

Reznikov told the Guardian, “The second part of the mobilisation, 150,000 approximately, started their training courses in different camps.

“The [draftees] do a minimum of three months to prepare. It means they are trying to start the next wave of the offensive probably in February, like last year.

“That’s their plan. The Kremlin is trying to find new solutions [for] how to get the victory.”