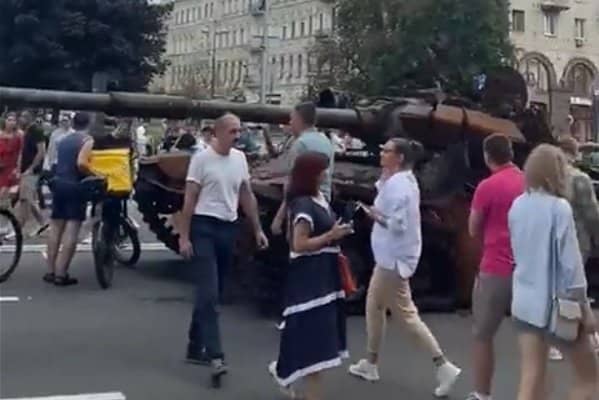 US intelligence warns that the Kremlin will step their “efforts to launch strikes” in the “coming days” as Ukraine’s independence nears.

The US embassy are strongly urging all their citizens to leave Ukraine in their first security alert in many months.

“The Department of State has information that Russia is stepping up efforts to launch strikes against Ukraine’s civilian infrastructure and government facilities in the coming days,” the US embassy said in a statement.

President Volodymyr Zelensky warned Moscow that there will be a very “powerful response” to any attacks on “Ukrainian infrastructure and civilians.”

‘The set is built, Hollywood, this could be turned into a cool movie’ as ‘the careers of 45,000 Russian zombies are finished’

The former director of the Royal United Services Institute, Professor Michael Clarke told Sky News that Russians are feeling “very provoked” at the moment and it is a “reasonable bet” they will attack on Ukraine’s independence day

Professor Clarke warned, “The Russians are feeling very provoked at the moment.

“They’ve had a lot of attacks in Crimea, the assassination of Darya Dugina, the daughter of Alexander Dugin, the fact it’s Ukraine’s national day tomorrow and Ukrainians are going to celebrate in some sort of way, fairly low-key to make it safe.

“So it’s a reasonable bet that the Russians will try to mount something in order to indicate that they feel provoked but what they can do is just more of the same.

“There may be attacks, they may be very vicious, but they won’t make any strategic difference to the situation that the Russians are in.”

Ahead of Ukraine’s 31st anniversary of independence from Soviet rule this Wednesday President Zelensky has said that people will not be able to meet in large groups over the threat of rocket attacks.

“Such is our enemy. But in any other week during these six months, Russia did the same thing all the time – disgusting and cruel.”