Home Business News Russian TV discuss to ‘hang, shoot, or quarter’ captured British fighters and how can the ‘British Empire respond if they are shot’ 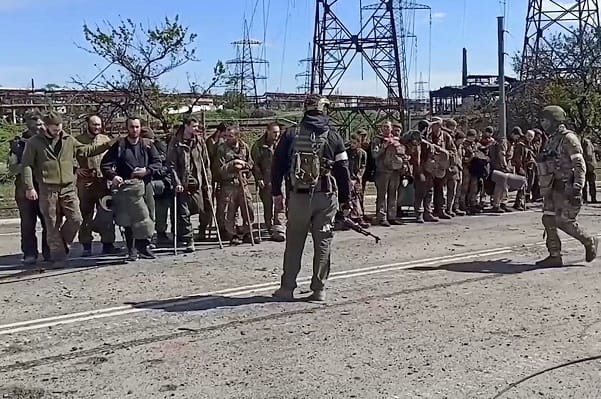 Russian state TV have been discussing how the captured British fighters should be killed and were trying to decide whether to “hang, shoot, or quarter” them.

Two captured British mercenaries Aiden Aslin, 28, and Shaun Pinner, 48, are facing charges for fighting in Ukraine and have been told they will be executed.

Both of the prisoners of war are standing trial in a kangaroo court in the separatist Donetsk People’s Republic (DPR).

Political scientist Yaakov Kedmi suggested that they should replicate the “hangings in Kyiv Square,” and Malek Dudakov said the cases of these two soldiers will cause “a crisis” in the UK.

Vladimir Solovyov, a state TV host, said, “What can the British Empire respond with if two of its subjects are shot or hanged?

“Just wipe off their face?

“What can they do?

“They can threaten us with a seventh wave of sanctions.”

Kedmi said, “In 1945, they hung [war captives] in Kyiv’s public square! So will they shoot them or hang them?”

Solovyov responded, “No, quarter them!

“We’re in the 21st Century, in the centre of Europe, holding discussions about how to execute mercenaries.”

Whilst laughing the TV host added, “To hang them, shoot them or quarter them?

“This is chaos. We’re descending into chaos.”

Dudakov said, “The question about the mercenaries, whether to shoot them or execute them in some other way, we have plenty of time to answer that.

“But why can’t we use the current situation to offer them to Britain as part of an exchange for Russia’s frozen holdings.

“This will cause a storm in British society, particularly through the parents of these mercenaries.

“They’ll be in every tabloid yelling about it, that [the British government] won’t release the money frozen in those accounts to save the lives of their fellow Brits.

Tory Minister Robert Jenrick said the trial of the captured British fighters is a “completely outrageous breach of international law.”

Speaking first about Aslin, Jenrick said, “This is a British citizen, but who also holds Ukrainian nationality, is married to a Ukrainian, joined the Ukrainian armed forces in the normal way prior to Putin’s illegal invasion, and has been serving in the armed forces.

“He was taken prisoner by Russian forces and in accordance with international law and the Geneva Convention, he should be being held appropriately and returned to Ukraine at the earliest possible opportunity, possibly through a prisoner exchange.

“Instead of that Putin’s regime has chosen to put him and another British national, Shaun Pinner, on trial on trumped-up charges, no evidence whatsoever.

“This is, I’m afraid, a completely outrageous breach of international law and it should be condemned.”