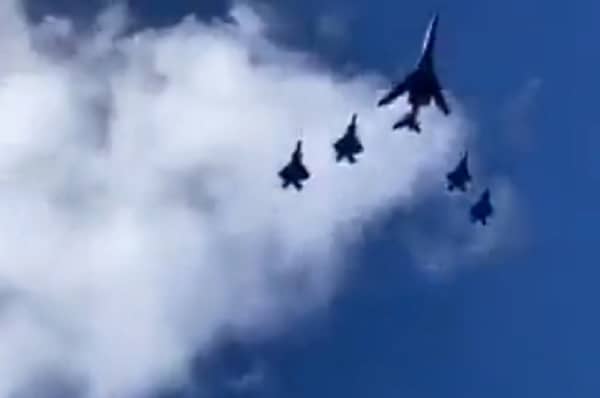 China has flown 22 fighter jets into Taiwan’s air defence one on Thursday afternoon which flew over the Taiwan Strait and the median line.

Taiwan’s President Tsai Ing-we said that Taiwan “will not provoke,” but it will “defend itself” in the face of Chinese aggression and described China’s military drills as “irresponsible” for “the international community.”

Song Zhongping, who is a military expert warned that China’s “operational plans” which are being rehearsed” could “be directly translated into combat operations.”

Quoted by the Times, he said the “comprehensive and highly targeted” operations shows “the determination of resolving Taiwan question once and for all.”

#NancyPelosi with strong performance she is with strong #Security force crossed the #Taiwan #Strait pic.twitter.com/u2D2gyo756

Ma Chen-kun, a professor at Taiwan’s National Defence University, said the exercises will also demonstrate how the Chinese army could facilitate the landing of troops.

Ma warned, “If the People’s Liberation Army actually invades Taiwan in an all-out invasion, the concrete actions it will take, it’s all in this particular exercise.

“The main thing is they will cut off Taiwan’s links to the outside world, from their sea, they would suppress the coastal defence firepower.”

In a statement, “The Ministry of National Defence stresses that it will uphold the principle of preparing for war without seeking war, and with an attitude of not escalating conflict and causing disputes.”

Beijing’s nationalist state-run tabloid Global Times said, the exercises are “unprecedented” that ballistic missiles are flying over Taiwan for the first time.

The newspaper added, “This is the first time the PLA will launch live long-range artillery across” the Taiwan Strait.

Taiwan has “strongly condemned” China for the military exercises around their island and launching multiple missiles.

“The Ministry of Foreign Affairs (MOFA) of the Republic of China (Taiwan) strongly condemns the Chinese government for following the example of North Korea in wilfully test-firing missiles into waters near other countries, and demands that China exercise self-restraint”, a statement read.

“The Ministry also calls on countries around the globe to continue to speak up in support of democratic Taiwan in order to jointly safeguard the values of freedom and democracy, to maintain the rules-based international order, and to ensure a free and open Indo-Pacific.”