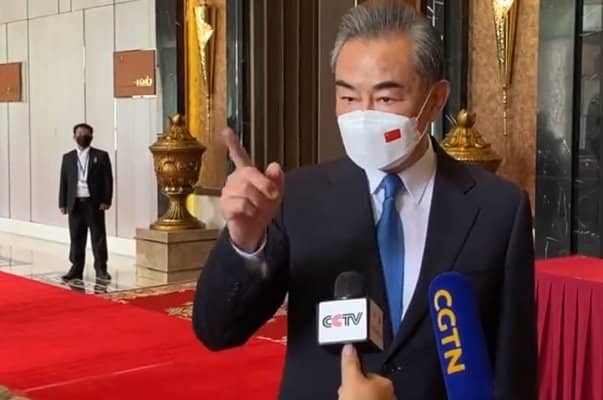 Yi furiously wagging his finger said that the US has violated “China’s sovereignty” and accused Taiwan of “rising on the US’s coat tails.”

The Foreign Minister added, “the perverse actions would not alter… the historical trend that Taiwan will return to the motherland.”

Another Chinese official warned the White House, “Those who play with fire will perish by it and those who offend China will be punished.”

Moscow has waded in to the situation and warned that the world is now closer to world war and accused Pelosi’s visit to Taiwan as “provocation.”

#Latest Wang Yi on #Pelosi's #Taiwan trip: Those who offend China will be punished –bit.ly/3OTM07ppic.twitter.com/l4prJQ75Dh

The Kremlin’s spokesman Dmitry Peskov warned that the level of tension which the US has provoked by Pelosi’s visit to Taipei “should not be underestimated.”

Peskov told reporters that there are no planned visits between President Vladimir Putin and Chinese leader Xi Jinping over Pelosi’s visit.

Pelosi’s trip to Taipei has heightened US-China tensions and the Communist Party said that the trip could embolden Taiwan to make its decades-old de facto independence permanent, which will lead to war Beijing warns.

Wang said, that “according to international rules of engagement, this can possibly be seen as an act of war.”