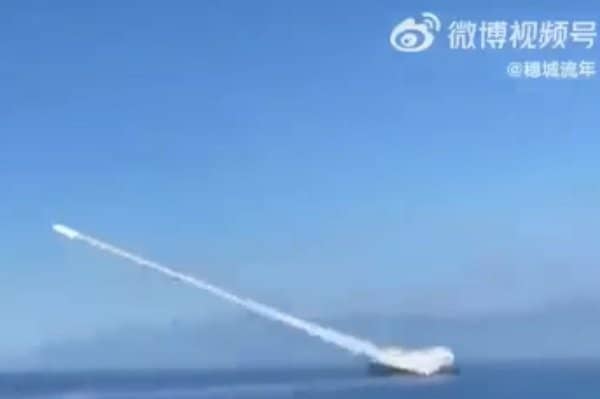 On Thursday afternoon “five Chinese ballistic missiles landed in Japan’s waters” which were launched from the Fujian province and flew over Taiwan.

Tokoyo confirmed this afternoon that the five missiles landed off Hateruma which is an outer island off the main islands of Japan which are the exclusive economic zone, and added that three “flew over the main island of Taiwan.

Japan said, “The Ministry of Defence and the Self-Defence Forces will continue to make every effort to collect and analyse information and conduct warning and surveillance.”

The Japanese Defence Ministry said, “China seems to have launched nine ballistic missiles between around 15:00 and past 16:00 today. Five of them are presumed to have landed in Japan’s Exclusive Economic Zone (EEZ).”

The PLA began a three-day exercise around Taiwan.#China #Taiwan pic.twitter.com/FyTJkPNSF1

Song Zhongping, who is a military expert quoted by the Times, said the “comprehensive and highly targeted” operations shows “the determination of resolving Taiwan question once and for all.”

In a statement, “The Ministry of National Defence stresses that it will uphold the principle of preparing for war without seeking war, and with an attitude of not escalating conflict and causing disputes.”

Beijing’s nationalist state-run tabloid Global Times said, the exercises are “unprecedented” that ballistic missiles are flying over Taiwan for the first time.

Missile launches by a Chinese ship during exercises near Taiwan this afternoon.#Taiwan #China pic.twitter.com/R32wkDut5q

The newspaper added, “This is the first time the PLA will launch live long-range artillery across” the Taiwan Strait.

Taiwan has “strongly condemned” China for the military exercises around their island and launching multiple missiles.

“The Ministry of Foreign Affairs (MOFA) of the Republic of China (Taiwan) strongly condemns the Chinese government for following the example of North Korea in wilfully test-firing missiles into waters near other countries, and demands that China exercise self-restraint”, a statement read.

#NancyPelosi with strong performance she is with strong #Security force crossed the #Taiwan #Strait pic.twitter.com/u2D2gyo756

“The Ministry also calls on countries around the globe to continue to speak up in support of democratic Taiwan in order to jointly safeguard the values of freedom and democracy, to maintain the rules-based international order, and to ensure a free and open Indo-Pacific.”