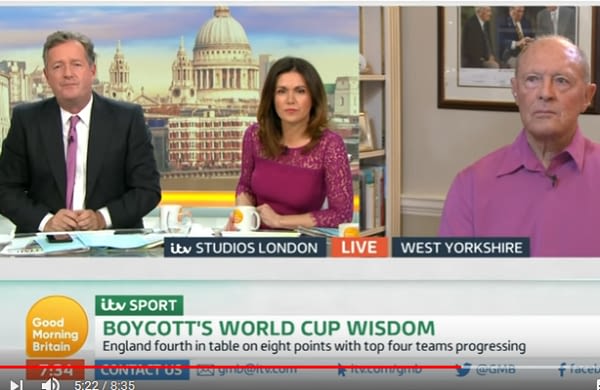 He gave his views on a no-deal Brexit, he said, “Great Britain – the United Kingdom – we as a people, if we don’t have a deal with Europe then it’ll collapse, it’ll be terrible.

“That water around our island has saved us from all kinds of things throughout history because we’re a strong people.

“We’ll survive. We’ve got India queuing up to do deals, we’ve got America, our best friend, queuing up to do a deal, and there’s plenty of others, we haven’t even talked about China, 1.3 billion.

“So, let’s hang on, we’re not totally dependent on 300 million people in Europe.”

Morgan was suitably impressed with Boycott and said, “Geoffrey, that’s one of the greatest mission statements I’ve heard probably since the era of Churchill.”

Good Morning Britain tweeted, “Can we just give Geoffrey Boycott the keys to No 10, please?”