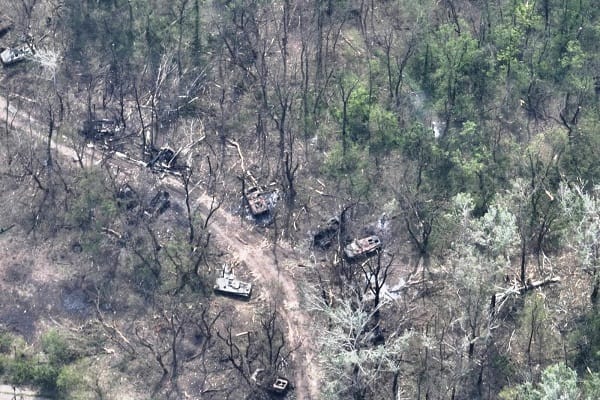 Russian commanders take ‘highly risky’ moves resulting in 1,000 troops being obliterated which has not seen since World War II

Russian commanders are taking “highly risky” tactical monourvres which has resulted in an entire battalion with around 1,000 troops and armoured vehicles being obliterated.

The British Ministry of Defence (MoD) said Russian forces have suffered a humiliating defeat as Battalion Tactical Group (BTG) was destroyed as they tried to cross the Siverskyi Donets river in the Donbas, eastern Ukraine.

The MoD tweeted, “Images indicate that during the crossing of the Siverskyi Donets river west of Severodonetsk, Russia lost significant armoured manoeuvre elements of at least one Battalion Tactical Group as well as the deployed pontoon bridging equipment.”

The Times reported that around 1,000 Russian soldiers could have been killed with more than 70 armoured vehicles destroyed, which shows the pressure Russian commanders are under.

The MoD added, “Conducting river crossings in a contested environment is a highly risky manoeuvre and speaks to the pressure the Russian commanders are under to make progress in their operations in eastern Ukraine.”

A typical BTG has around 600 to 800 soldiers with 10 tanks and 40 infantry fighting vehicles, Vladimir Putin had around 170 BTGs when the war started on 24 February.

A retired US Army Colonel said the death toll was something not seen since World War II, which shows low morale and how ineffective the Russian Army is.

He said, “Maybe you’d have to go back to World War II to have that sort of proportion of senior officers being killed on the front lines.”

“It suggests that the generals need to be at the front lines to ensure that their troops are conducting the battle plan in the way that they want.”

Speaking to ABC News, he added, “But that also suggests a lack of confidence in their troops if they need to be that far forward with that many senior folks.”