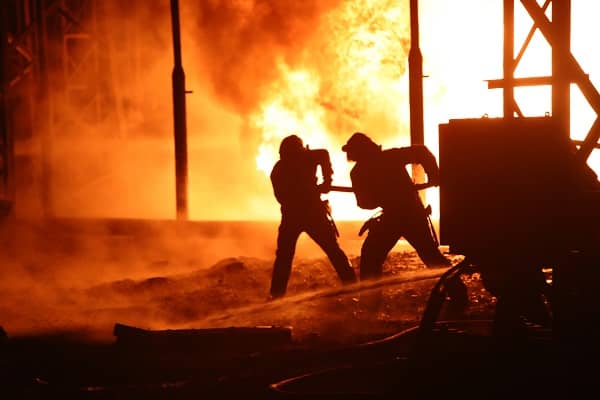 On Monday morning Kyiv was rocked by cruise missile attacks with many killed and injured and citizens are being told to “stay in shelters.”

This comes as on Saturday Ukraine blew up a small section of the Kerch bridge which connects Russia to Crimea.

For the first time in many months residents in Kyiv were woken up by loud explosions and air raid sirens and the captial’s Mayor Vitali Klitschko, confirmed there was several strikes in the central Shevchenkivskyi district on Monday morning.

He wrote on his Telegram channel, “Several explosions in the Shevchenskiv district – in the centre of the capital.”

Projectile impact in Kyiv through the eyes of eyewitnesses pic.twitter.com/sHZE3eqiiX

Nolan Peters, a war correspondent for the Coffee or Die magazine, said Kyiv has not experienced anything this intense for many months.

He tweeted, “Series of massive explosions in Kyiv.

“Woke my wife and I up and we ran from bed to the bomb shelter.

“Nothing this intense in Kyiv for months.”

Just minutes from my home. Just 20 minutes ago. What is #Russia trying to hit? The national university? The park? Or the playground? pic.twitter.com/311EHalGH6

The Ukrainian military chief said this morning that at least 75 missiles have so far been fired in ongoing attacks,

In a tweet, General Valerii Zaluzhnyi said, “The terrorist country carries out missile and air strikes on the territory, uses attack UAVs.

“In the morning, 75 rockets were launched. 41 of them were neutralised by our air defence.

“The Armed Forces do everything possible to protect fellow citizens. However, the enemy attack continues.

“I urge everyone to stay in shelters!”

He wrote, “Kyiv. The rocket fell right in the centre of the city.

“Cars are burning, and windows have been shattered in houses. There are dead.”

Dmytro Kuleba warned that Russia “will not” break Ukraine, he added that Vladimir Putin “is a terrorist who talks with missiles.”

He said, “Multiple Russian missile strikes across Ukraine. Putin’s only tactic is terror on peaceful Ukrainian cities, but he will not break Ukraine down.

“This is also his response to all appeasers who want to talk with him about peace: Putin is a terrorist who talks with missiles.”

He added, “They want panic and chaos, they want to destroy our energy system. They are hopeless.

“The second target is people. Such a time and such targets were specially chosen to cause as much damage as possible.”