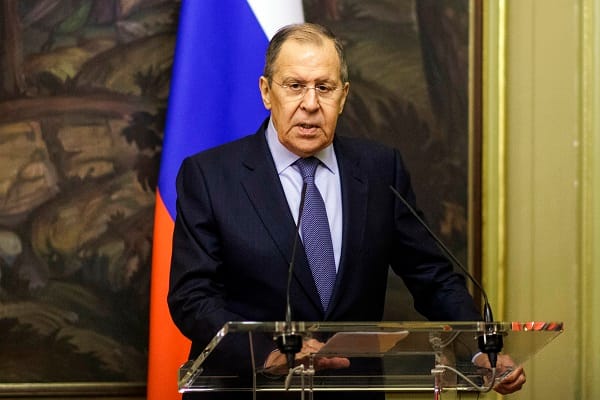 On Thursday the Ukrainian President Volodymyr Zelensky said that Russia needs “preemptive strikes” so that they will know exactly “what awaits them if they use nuclear weapons,” it must not be “the other way around.”

Zelensky said on Thursday that “NATO should make it impossible for Russia to use nuclear weapons.”

On Friday the Russian Foreign Minister said that Zelesnky’s remarks that NATO should launch a strike on Moscow demonstrates the need for their so called “special Military Operation.”

Sergei Lavrov said, “By doing so, (he) essentially presented the world with further evidence of the threats posed by the Kyiv regime.

“This is why a special military operation was launched to neutralise them.”

According to RIA news agency, the Kremlin spokesman Dmitry Peskov denounced Zelensky’s remarks as “an appeal to start yet another world war with unpredictable, monstrous consequences.”

The Kremlin has previously said that their invasion is needed to demilitarize and “denazify” Ukraine which is a baseless pretext for the war in thr country.

Speaking via video link at Australia’s think tank, the Lowy Institute, President Zelensky said, “Preemptive strikes are needed so that they know what awaits them if they use nuclear weapons.

“Not the other way around, waiting for Russia’s nuclear strikes and then saying, ‘oh, you’ve done that, then get this.”

The Ukrainian Defense Minister Oleksiy Reznikov said that the US has also sent harsh signals to the Kremlin.

If Russia were to use tactical nuclear weapons then this will lead to the opening of the last destructive direction against the Russian Federation,

Reznikov said, “If we evaluate this risk [of the use of nuclear weapons by the Russian Federation] as a percentage, it is much less than anything.

“And this is confirmed, among other things, by our partners, both the United States and Great Britain.”

On Friday the US President Joe Biden warned the world is on the brink of “Armageddon” because for the first time since the Cuban Missile Crisis in 1962 “we have a direct threat to the use of nuclear weapons” from Vladimir Putin.

Biden warned that Putin is not joking to use “tactical nuclear weapons” because the Russian Army are “significantly under performing” in the battlefields of Ukraine.

President Biden made is very clear that he and his officials are keeping a eye on Putin’s next possible moves in the Ukraine, Crimea and the Black Sea.

He added, “We have not faced the prospect of Armageddon since Kennedy and the Cuban missile crisis.

“[Putin is] not joking when he talks about potential use of tactical nuclear weapons or biological or chemical weapons, because his military is, you might say, is significantly under performing.

“I don’t think there’s any such thing as the ability to easily (use) a tactical nuclear weapon and not end up with Armageddon.”