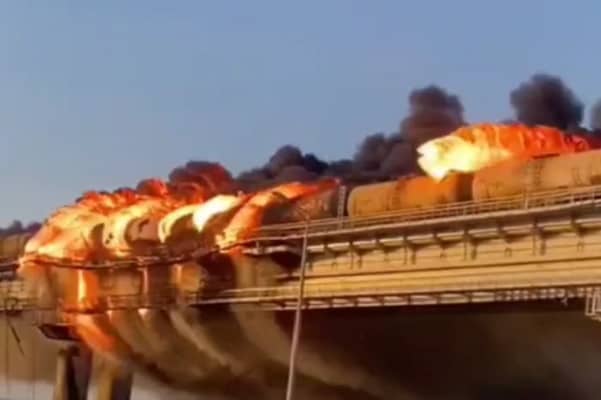 On Saturday the Ukraine blew up a small section of the Kerch bridge which connects Russia to Crimea.

The Ukrainian Defence Ministry celebrated said in a taunting statement over the Russian control in Crimea, “The guided missile cruiser Moskva and the Kerch Bridge – two notorious symbols of Russian power in Ukrainian Crimea – have gone down.

Bashkin, vowed the attack would not go unanswered and said, “This was a declaration of war without rules.”

He added, the Kremlin’s response would be “adequate, conscious and, possibly, asymmetric.”

Kremlin insiders have warned that Vladimir Putin will use tactical nuclear weapons to avoid a military defeat as Ukraine are making huge gains and now have their eyes set on Crimea.

Farida Rustamova, a Russian investigative journalist, was told by a Kremlin insider, “The 300,000 [conscripts] are just a distraction.

“Now it’s partial, but then there will be mass mobilisation, and after that tactical nuclear weapons.”

A member of the Kremlin elite who has previously worked closely with the Russian leader warned, “Putin always chooses escalation.

“And he will continue to choose escalation at any unpleasant juncture, up to and including nuclear weapons.”

Two weeks ago Putin said, that he would use all “forces and means at our disposal” to protect Russian territory and sovereignty after four regions were annexed and a decree was signed making them part of the Russian Federation.

Just last week the US President Joe Biden also warned that world is for the “first time since the Cuban missile crisis, we have a direct threat of the use of a nuclear weapon if in fact things continue down the path they are going.

“I don’t think there’s any such thing as the ability to easily use a tactical nuclear weapon and not end up with Armageddon.”