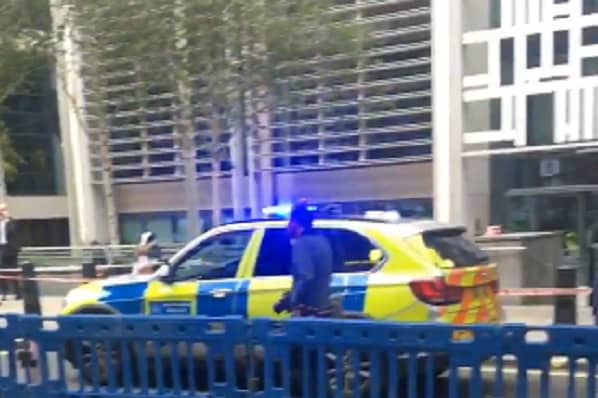 Man stabbed outside Home Office and terror is not ruled out

A man in his 60’s was stabbed outside the Home Office in Marsham Street, London on Thursday afternoon.

Shortly after 1pm armed police were called to the scene, and a 29-year old man was arrested on suspicion of being in possession of CS spray and grievous bodily harm.

Scotland Yard are continuing with their enquiries and have not at this stage ruled out terrorism.

#Homeoffice building on lockdown after a stabbing pic.twitter.com/hCErbYQ20x

he Metropolitan Police said, “Police were called at 13:06hrs on Thursday, 15 August to Marsham Street, SW1 following a report of a man with a knife at the location.

“Officers attended to find one man with knife injuries.

“London Ambulance Service attended the address where they are with the injured party.

“The injuries are currently being treated as life threatening.

“One man has been arrested on suspicion of grievous bodily harm and taken to a police station.

“Enquiries are ongoing into the exact circumstances of the incident.”

An eyewitness who asked to remain anonymous said, “He was standing over there outside the Home Office and then he was putting something away in his bag, but I didn’t see a knife or anything.

“He was putting something away and then he just calmly just walked off down the road as if nothing had happened.

“Then people were being asked to go into the Home Office, they were being ushered in.”

Urm, have the police accidentally confused the #HomeOffice, with Chicken Cottage?! #KnifeFree https://t.co/SVAiGZJVbC

Eyewitness Guy Ellis said, “I was sat outside the Home Office… and on the other side of the entrance I just saw a bloke take a knife out of his bag, and just wander up the path, and stop in front of two girls who were just sat there having a chat.”

He then “then he wandered back and turned round and crossed the road very calmly and merged into the crowd.”

Another eyewitness said, “Some time later a gentleman with quite a bloodied face and with dressing pressed into his face was escorted out by the Home Office by paramedics.

“He was quiet and walking on his feet, not being physically supported.”

Home Secretary Priti Patel said on Twitter, “All my thoughts are with the victim and their family following horrific unprovoked knife attack on Marsham Street.”

A Home Office spokesperson said, “The Metropolitan Police is investigating a knife attack which took place outside the Home Office this afternoon.

“The victim is receiving medical care. This is a deeply concerning incident and our thoughts are with him and his family.

“As this is an ongoing investigation it would be inappropriate to comment further.”

Warning issued after November emerges as worst month for tool...