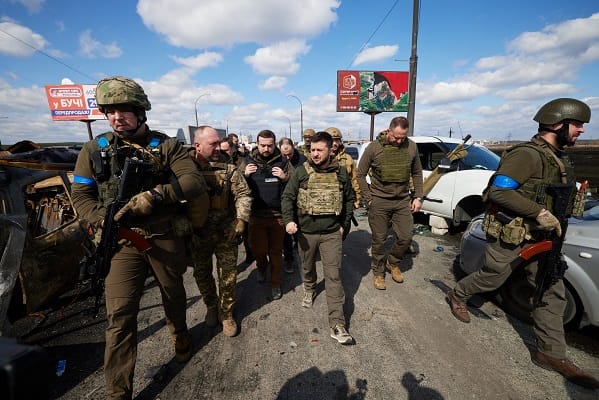 The Prosecutor General’s Office (PGO) of Ukraine has said that the former deputy head of the Main Intelligence Agency of the Ministry of Defense of Ukraine has been arrested under suspicion for high treason and arrested without bail.

An investigation which has been ongoing since 2014, has found that the suspect was recruited and acted in the interests of Russia’s special services.

They claim that the former intelligence officer collected and transmitted secret information about the current military-political situation in Ukraine.

He also used methods used by the Armed Forces of Ukraine and law enforcement agencies in countering Russian aggression.

The PGO said on Friday, “Under the procedural leadership of Lviv Regional Prosecutor’s Office, Major General, former Deputy Head of the Main Intelligence Agency of the Ministry of Defense of Ukraine was informed of suspicion of high treason (part 1 of Article 111 of the Criminal Code of Ukraine).”

The added, “At the direction of the special services of the aggressor country, he sent them information from the agencies of the Ministry of Defense, the Main Intelligence Agency, the National Academy of the Ground Forces of Sahaidachny, aviation and military-industrial state-owned enterprises on the activities of the latter, as well as undercover communications of the special services of Ukraine for a temporary occupied territory.”

The prosecutor’s office also said that in February 2022, during a search at his place of work,  he tried to shoot SBU officers who arrived to conduct investigative actions.

He was informed of the suspicion of encroachment on the life of a law enforcement officer and illegal possession of weapons (Article 348, part 1 of Article 263 of the Criminal Code of Ukraine).

Spokesperson for the Ukrainian Intelligence Agency Artem Dekhtiarenko said, “Currently, the suspect has been chosen a measure of restraint in the form of detention without determining the amount of bail.

“SBU officers detained a suspect at the beginning of Russia’s full-scale invasion. During searches at the place of work, he tried to shoot representatives of the SBU investigative and operational group.

The former intelligence officer was the deputy head of the Main Intelligence Agency of the Ministry of Defense in 2008-2010, thereafter he worked in various positions in this department and in the leadership of the State Space Agency of Ukraine.