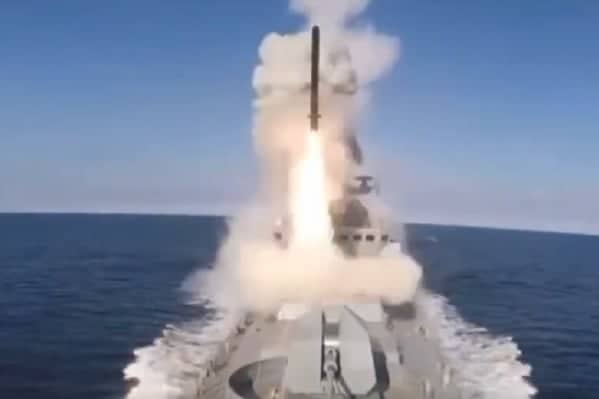 Russia have launched one of the largest attacks on Ukraine this New Year’s Eve from the Black Sea with the skies filled with vapour trails in the Russian city of Astrakhan.

According to reports this is largest barrage of Russian cruise missiles to attack Ukraine since 10 October.

Haunting air raid sirens can be heard across Ukraine with widespread explosions have rocked many parts of the country including Mykolaiv, in the south of the country, and Khmelnytskyi, in the west.

Mykolaiv Governor Vitaly Kim said, “The occupiers have decided to try to spoil the day for us.”

The sky over the Russian city of Astrakhan on the Black Sea dozens of missiles can be seen on their way to bombard Ukrainian cities.

Roman Motychak the founder of Ukrfinformume warned resident shortly after the attack started on Twitter, “Kyiv, stay the f**k in shelters!!!”

russians released a video with a volley of Kalibr missiles from the Black Sea, which were used to launch missile strikes on Ukraine. pic.twitter.com/WLoLGpTc0X

Kyiv Mayor Vitaly Klitschko reported that there were explosions in the Solomianska, Pechersk and Holosiivsk districts in the Ukrainian capital.

“There is destruction. Rescuers and medics are on their way,” Klitschko wrote.

Writing on Telegram, Kyiv Mayor Vitali Klitschko added, “The buildings of two schools in the Solomyansk district of the capital, one in Pechersk, suffered varying degrees of damage.

“There is one kindergarten in the Solomyan district. There are no casualties at these facilities.

“As a result of the Russian attack on civilian objects in the capital, one person died, 20 were injured. 14 victims were hospitalised, six were treated by medics on the spot.”

Oliver Carroll, the Economist correspondent in the capital said in a tweet, “Air defences have been working pretty non-stop for the past five minutes in Kyiv.

“I don’t *think* there have been any impacts so far, but it’s only the first wave of missiles. And other cities not so lucky.”

There have been multiple reports on social media that many cities across Ukraine have been rocked by huge explosions.

Euan MacDonald, a Kyiv-based journalists, wrote on Twitter, “No power in my part of Kyiv, then the air raid alert goes off, and now they say missiles are incoming.

“Air defences said to be working in Kherson, Zhytomyr, Kyiv and Vinnytsia oblasts.”

Air Defense is active across all major cities, air sirens in the whole country of Ukraine.

President Volodymyr Zelensky said on Friday evening in his nightly address, “There are two days left in this year. Perhaps, the enemy will try once again to make us celebrate the New Year in darkness.

“Perhaps, the occupiers are planning to make us suffer with the next strikes at our cities.

“But no matter what they plan, we know one thing about ourselves: we will survive. We will. We will drive them out.

“No doubt about it. And they will be punished for this terrible war.”