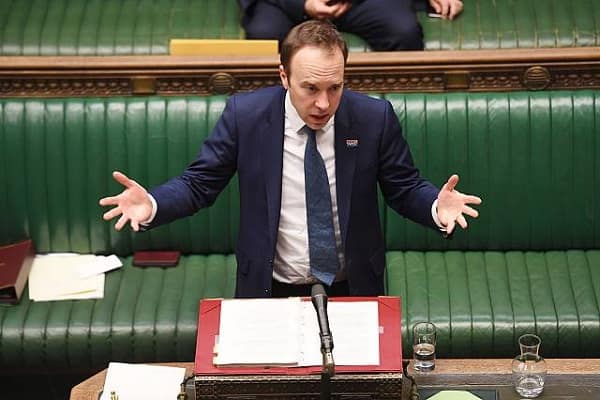 Heath Secretary Matt Hancock has announced in the House of Commons on Wednesday that 20 million more people are to now move into Tier 4 restrictions.

Hancock told MPs that the imminent changes that will take place will cause a “significant burden on people. I’m afraid it’s absolutely necessary.”

The Health Secretary added, “Sharply rising cases and the hospitalisations that follow demonstrate the need to act where the virus is spreading.”

A total of 44 million people or 78% of the population in England will be in Tier 4 restrictions, this comes after 53,135 people were recorded with the virus on Tuesday.

Areas that are entering Tier 4 from Thursday are:

Despite England experiencing a surge in infections Hancock confirmed that he will not implement Tier 5 restrictions just yet.

Speaking to LBC radio, he said, “I’m not announcing anything above Tier 4 today,” when asked if he will introduce the new Tier.

Hancock added, “And we need to see in Tier 4 areas not just rules, but people taking that responsibility as they did in the first and second national lockdown to keep the rates under control.”

The Health Secretary was asked by Andrew Castle if if he will expand Tier 4 in more areas, he replied, “yes.

“Because in the short term in the here and now we’ve got to keep this virus under control, and the strategy all along has been to suppress the virus until the vaccine can make us safe, and the vaccine making us safe bit has just gone a whole lot easier.”