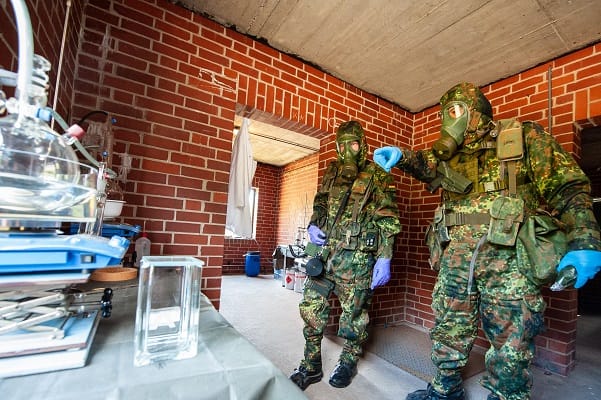 The Ukraine has been strongly advised to “destroy high-threat pathogens to prevent any potential spills” which would spread across Ukraine’s population, the World Health Organization (WHO) advised.

Russia’s constant heavy bombardment of cities has raised the risk of a deadly pathogen being released which would create various diseases across the population.

Reuters news agency was told by the WHO that they had collaborated with Ukrainian public health labs for years to promote security practices aimed to prevent “accidental or deliberate release of pathogens.”

It added, “As part of this work, WHO has strongly recommended to the Ministry of Health in Ukraine and other responsible bodies to destroy high-threat pathogens to prevent any potential spills.”

On Wednesday, Russian foreign ministry spokesperson Maria Zakharova accused the US of operating a biowarfare lab in Ukraine.

Zakharova said that documents unearthed by Russian forces showed “an emergency attempt to erase evidence of military biological programmes” as she claims they had destroyed lab samples.

She wrote on Twitter, “This is all an obvious ploy by Russia to try to justify its further premeditated, unprovoked, and unjustified attack on Ukraine.”

The British Prime Minister Boris Johnson told Sky News that he fears Russia may have a sort of a maskirovka, a fake story so they can launch chemical weapons in Ukraine.

Johnson warned, “The stuff which you are hearing about chemical weapons is straight out of the Russian playbook.

“They start saying that there are chemical weapons that are being stored by their opponents or by the Americans, so that when they themselves deploy chemical weapons – as I fear they may – they have a sort of a maskirovka, a fake story, ready to go.”