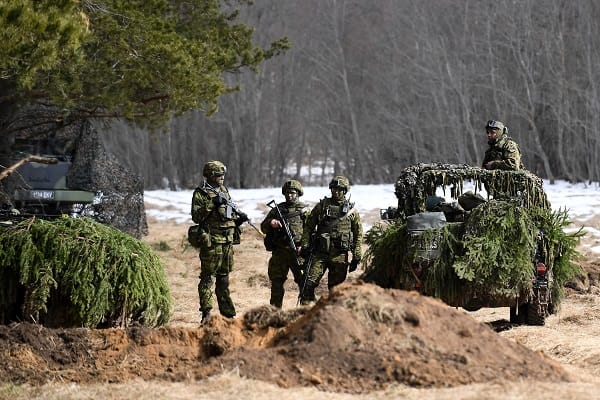 The “whole population” of the UK, NATO and Western allies have been warned they must face the possibility of an all out war with Russia which is a “very real possibility.”

General Sir Richard Shirreff, who served as the Deputy Supreme Allied Commander Europe for the Western military alliance also warned that the prospect of a nuclear conflict is real and the West should not ignore this.

Putin’s so called “special military operation” has so far “failed” and the Brits who live in the UK could end up fighting against Russian forces.

The former British General wrote in the Daily Mail, “Britain’s leaders… need great courage and the support of our whole population.

“Although Ukraine is fighting back, a war between NATO countries and Russia remains a very real possibility.”

He said the UK’s approach to date of weakening its own armed forces drained strength for the British forces.

He stated, “instead of investing in our armed forces, successive UK defence reviews have drained our strength – and strength is the only standpoint that Putin understands.”

Sir Richard warned that should Putin resort to the “genocidal tactic” of going nuclear, “the response of the West would be unprecedented,” adding, that “even Russia could not withstand such pain.”

The new Chief of the General Staff of the British Army has also warned that British troops must prepare to “fight in Europe once again” and believes that World War III could be around the corner.

General Sanders said in June, “There is now a burning imperative to forge an Army capable of fighting alongside our allies and defeating Russia in battle.

“We are the generation that must prepare the Army to fight in Europe once again.”

Putin has appointed General Sergie Surovikin thrives on bloodshed and “achieved notoriety in Russia” for “killing tens of thousands of civilians” by “carpet bombing of cities.”

The Ukraine and the West have been given a grim warning that General Surovikin is a “nasty piece of work” who “knows not limit to war.”

This is a very loud and clear sign that the Russian leader does not want an end to war and there will be further bloodshed.

Professor Scott Lucas of American Studies and specialises in foreign policy gave a warning about General Surovikin that he is a very nasty history of committing crimes against humanity.

Professor Lucas told Times Radio: “The latest General to be topped, General Surovikin, is a particularly nasty piece of work.

“Achieved notoriety in Russia, in 1991 when there was an attempted coup by the military.

“And he drove a tank over protestors, killing three of them.

“But then he achieved much wider notoriety with overseeing devastating operations in Chechnya and then for years in Syria.”